Scotland's Ryan Grant called up to join the Lions in Australia 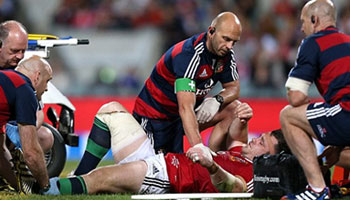 Cian Healy will play no further part in the British & Irish Lions tour of Australia after it was found that he has suffered significant ligament damage to his ankle. Gethin Jenkins has a calf strain, so Scotland’s Ryan Grant will join the squad as cover.

Healy injured his ankle after a much publicised game against the Force, that included an allegation of biting. He was cleared at a disciplinary hearing, but later received the unfortunate news that scans revealed bad ligament damage.

“Firstly, our thoughts are with Cian. It has been a day of mixed emotions for him after being quite rightly being cleared of foul play but then the scan revealing the extent of the damage to his ankle. He has made a big contribution on and off the field in the last two weeks and we wish him well in his recovery,” said coach Warren Gatland.

Gethin Jenikins picked up a calf strain during captains run, so he is out of the game against the Reds in Brisbane tomorrow. Mako Vunipola will start, while Dan Cole moves onto the bench.

Alex Corbisiero is already on the way over from England, and Ryan Grant departs Durban, where Scotland were set to face Samoa in the first game of the quadrangular series in South Africa.

“Gethin has trained all week but he felt some tightness in his calf today so it’s right not to play him. We will assess him over the next 24-48 hours but Mako has done well in the last two games and this is another chance for him to step up,” added Gatland.

“Given Cian’s injury we have decided to bring Ryan in. He has played well in the RaboDirect Pro 12 this season and for Scotland in the RBS Six Nations and we look forward to him and Alex Corbisiero arriving tomorrow.”

Grant spoke to scottishrugby.org after finding out that he will join British & Irish Lions squad