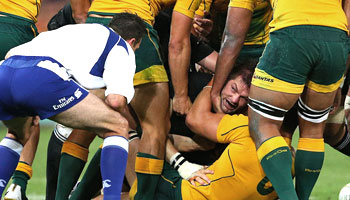 Australia’s Scott Higginbotham has been cited twice following an incident in the first half of the third Bledisloe Cup Test in Brisbane on Saturday. The Reds flanker could miss a large chunk of the Wallabies end of year tour of the UK and Europe as a result.

Higginbotham went out of his way to walk into All Black skipper Richie McCaw with his knee, then fell on him before the two came to grips. Higginbotham then followed up with a head-butt.

Not too long ago Springbok Eben Etzebeth mock-head-butt Wallaby skipper Nathan Sharpe, with very little – if any – contact, and receive a two week suspension for it.

In this case, with it after the whisle and both the knee and head used, the Wallaby loose forward could miss most of the tour, which sees them taking on France, England, Italy, and Wales.

“I saw the head-butt — it’s another cheap shot,” said New Zealand coach Steve Hansen. “He (McCaw) seems to get them every week but everyone seems to miss them.

“The game’s about playing rugby not about being a thug and taking cheap shots.  It is hard to deny the fact he head-butted him. If you grab a guy by the back of the neck and smack your head into him that’s a head-butt,” he said in the post match press conference.

A few weeks back Dean Greyling was suspended for a strike to McCaw’s face, and 14 months ago Quade Cooper was involved in a similar incident as he too kneed McCaw. Cooper was cleared without any punishment. Whether Higginbotham will be as fortunate or not remains to be seen.

He has been cited for both punching and striking, and will face an initial hearing with the duty judicial officer via conference call on Monday.

McCaw said that these type of incidents do annoy and frustrate him, but there’s little he can do about it. “It’s on TV so it will get dealt with,” he said.

UPDATE:
Higginbotham received a two-match ban, which rules him out of the England and France games. He will be available for selection however for Tests and Italy and Wales.