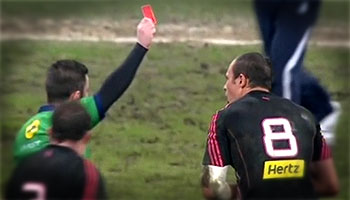 Italy captain and Stade Francais number eight Sergio Parisse was yesterday banned for 40 days following the red card he received his team’s Top 14 match against Bordeaux-Begles last Saturday. It wasn’t the only controversy of the match however.

Parisse was deemed to have insulted referee Laurent Cardona as his team lost possesion. Cardona would not tolerate it, so showed him a straight red card. As you can see in the subtitled video we’ve organised for you below, Parisse was shocked and incensed, arguing all the way to the sideline.

On Twitter he later apologied but insisted he was hard done by: “Sorry to my teammates and fans for the red card, which I find too harsh! I never insulted M.Cardona,” he tweeted.

“Thank you all for your messages of support! I am convinced that this misunderstanding would be cleared without consequences! #justice,” he later added, before yesterday being banned for 40 days (10 suspended) by the French natonal league (LNR) discplinary committee.

Parisse will miss the rest of the Six Nations as a result, although he has reportedly appealed the decision, with a new hearing to take place as early as Monday or Tuesday next week.

Wales defence coach Shaun Edwards has said that it isn’t the first time Parisse has done this.

“Funnily enough, we were watching footage on Friday from the game last year and you can clearly hear him on the ref’s mic coming out with profanities in the ref’s earshot about what damage he was going to do to one of our players if he did the same thing again,” said Edwards.

“So, it’s no surprise to me that he has been done for backchat to a referee.”

A few minutes after Parisse was sent off, Stade Francais scored from a quickly taken lineout that was taken with the wrong ball. Referee Cardona allowed it, sparking scenes from the sideline.

Below you can view a subtitled video of the Parisse incident, the controversial try, and a short Julien Dupuy interview. Thanks to one of our kind contributors for the translations.