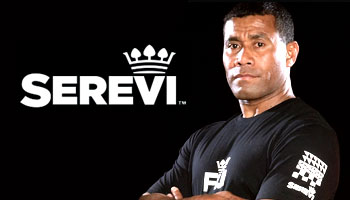 A few weeks back you were given the chance to submit questions for legend of the game Waisale Serevi via the RD Facebook Page . Three questions were picked and posed to the great man, so today you can hear his responses.

Serevi, arguably one of the greatest Sevens players of all time, now lives in the US, after leaving Fiji post retirement. He and his family have started a new life, and along with his company, Serevi , are looking to make a difference in rugby not only over there, but back in the pacific islands too.

His Island Kings project features a range of T-Shirts for Fiji, Tonga, and Samoa, with partial proceeds from sales going towards the teams and players, helping them out when competing in international tournaments. He is also involved in setting up rugby camps, with a team of coaches helping youth players.

The Serevi Rugby Academy is another thing he’s involved in, which sees him link up with legendary New Zealand Sevens coach Gordon Tietjens. In the following video, the great man answered three questions, as submitted by RD Facebook fans. They not only got their questions answered, but will receive signed Island Kings T-Shirts.

One of the questions in particular can be applied to any one of you, so if it were up to you, who would you love to see playing Sevens?

You can find out more on the Island Kings project and everything else Waisale is up to by checking out the Serevi Website .