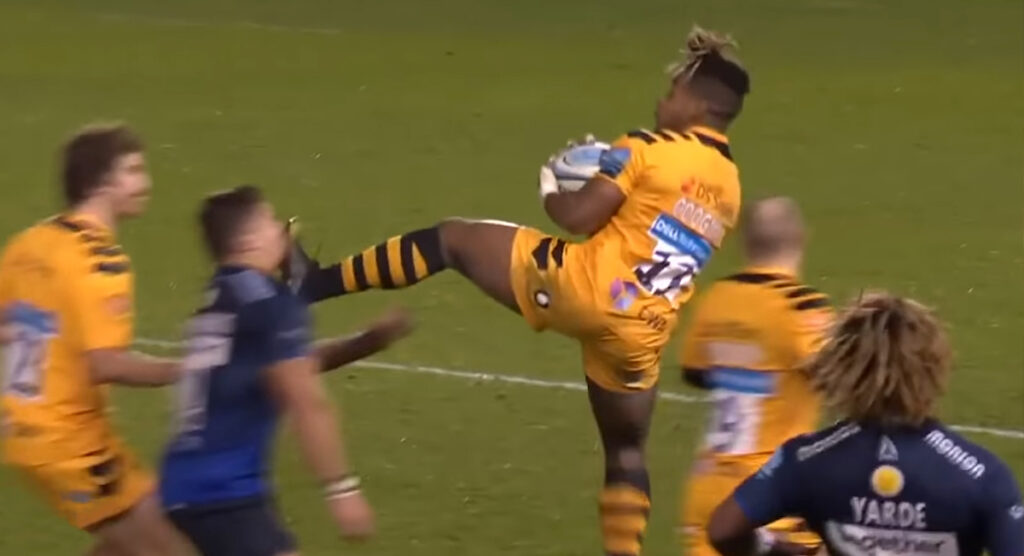 Wasps Paolo Odogwu last night appeared before an independent disciplinary panel after he was red carded in the final minutes of their match against Sales Sharks last Friday night.

Odogwu jumped to catch a high ball and as is customary, he got his leg up in front of him but then, whether by instinct, malice or sheer recklessness, extended his leg in a kicking motion.

Unfortunately, the boot caught the face of Rohan Janse Van Rensburg in a very nasty way.

Referee Tom Foley had very little option, upon TMO consultation, but to red card Odogwu, despite there being just a minute left to play.

He was given a six week suspension by the independent panel and is free to play again on Tuesday 23 December 2019.

Independent panel chair Dan White said: “The panel did not accept the player’s explanation that his leg extended to assist his balance in the air and prevent him from falling backwards.

“The panel found that while he did not intentionally aim to make contact with the Sale player’s face, he did intend to use his outstretched leg to fend off a potential oncoming player and was reckless as to whether or not it made contact or caused injury. In this case the dangerous action of the player resulted in a minor injury to the Sale player.

“In our opinion, this was nevertheless a top end entry point; his disrespectful behaviour to the referee and crowd, after receiving the red card, only served to reinforce our view. His behaviour reflected poorly on the player and the game as a whole.

“The player did accept the charge, has no prior disciplinary record, apologised for his actions and subsequent behaviour (both post-match, publicly on twitter and again at the hearing) and was therefore awarded full mitigation of 50%.”

You can see the incident in the highlights video below