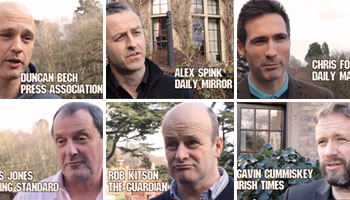 Before the Six Nations started we posted a Journalists preview piece that proved fairly popular, so here is a follow up, as some of the top UK and Ireland rugby writers discuss which teams have impressed, and how things are poised ahead of this coming weekend.

There is a specific focus on each individual team as we approach the mid-point of the tournament, so if you’re from one of the six nations, you may be interested to hear their thoughts. For the neutral, as said at the end of the video, it should be a fascinating weekend.

On Scotland’s meeting with Italy at Murrayfield, the feeling is that the hosts should take it.

“They are going to be a really interesting team by the time the world cup comes around,” said the Evening Standard’s Chris Jones, while the Daily Mirror’s Alex Spink felt Scotland should have beaten Wales, rather than narrowly lose 26-23. “The look on Vern Cotter’s face at the final whistle suggested he won’t put up with that again,” he said.

View more from the Six Nations in our new VideoHub

On the big Ireland vs England clash, feelings were mixed but they all felt it would be a tight contest.

“I think we (Ireland) can outsmart them, but if it becomes a power-based game, we can’t live with them unfortunately,” said the Irish Times’ Gavin Cummiskey.

On France and their potential, Chris Foy of the Daily Mail said: “They’ve got so much potential in there and it’s just so sort of bizarre and unsettling for them that it’s not coming out, and frankly, I’ll be very surprised if they have a major say in how this title goes.”

On Wales: “They’ve kept themselves in it with that win in Edinburgh, and they pulled that out late on, so that was impressive, but I think they’re just short of Ireland and England this year,” said Duncan Bech of the Press Association.

Your thoughts: How do you feel each team are placed going into the weekend, and at this midway point in the tournament? Let us know in the comments below