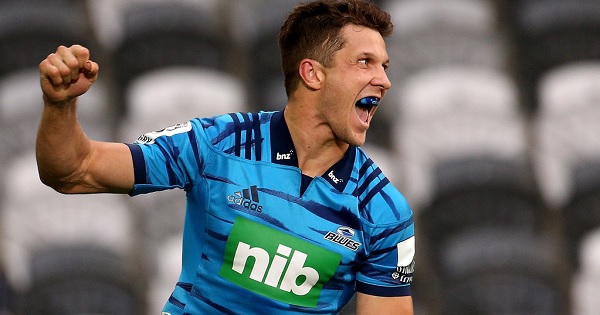 The Blues may have slipped to an opening round defeat to the Highlanders in Dunedin last weekend, but Tana Umaga’s side scored the pick of the tries in a pulsating encounter, including a scorcher from winger Matt Duffie.

The Highlanders came out on top 41-34 in a typically back-and-forward game which produced nine tries in total in front of the Forsyth Barr Stadium crowd.

The visitors boasted the off-loading skills of the mercurial Sonny Bill Williams. SBW was in fine form and proved more than a handful for the Highlanders defence throughout the game.

Bryn Gatland’s brilliant try gave the Blues the advantage early doors but the hosts recovered to lead 10-7. Then Williams and winger Rieko Ioane combined beautifully to create one of the tries of the season so far for Duffie.

First Williams took the ball into contact before sending one out the back to release Duffie down the blindside. Duffie then fed back inside to Ioane, who came off his own wing in support.

Ioane managed to commit two Highlanders defenders as he delivered a reverse off-load, freeing up Duffie and giving him an easy run to the line for the score.

Alas, the try did not guarantee the victory for the Blues as they slipped to a narrow defeat, however, it did showcase the pure skills on display in the premier Southern Hemisphere competition.

And this is only the second round of the season! MATCH HIGHLIGHTS HERE