South Africa bounce back with convincing victory over Samoa in Birmingham 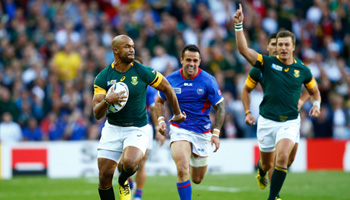 South Africa bounced back from their shocking defeat to Japan a week earlier to put in a much improved performance and beat Samoa by forty points. Winger JP Pietersen scored a hat-trick of tries as the Springboks lifted in all facets of the game, to win 46-6.

The Springboks fielded are far stronger outfit with the likes of Duan Vermeulen, Willie le Roux and Fourie du Preez all starting and making valuable contributions, particularly the latter.

Damian De Allende, who missed out in the Japan game, was excellent in the midfield while up front Adriaan Strauss, and later Schalk Brits, brought a new level of energy in the tight loose.

The sad news for the Springboks however is that skipper Jean de Villiers was injured in the match and has since announced his retirement. He took a knock on the jaw, damaging the right side just weeks after damaging the left.

“Injuries are part of rugby and I’ve had my fair share, so by now I know how to cope with them. It’s very sad, but life goes on – I need to take it all in and move forward,” said De Villiers.

“The last time I got injured in a World Cup match and had to go home, was in 2007, also against Samoa, and that finished well for the Boks, so hopefully it will happen again.”

The Springboks have called up Jan Serfontein ahead of their next match against Scotland.

Hear from De Villiers, speaking with a fractured jaw, in his post match interview on page two