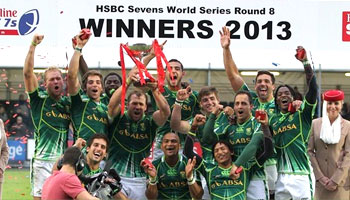 The South African Sevens team won their second consecutive tournament in the Sevens World Series on Sunday, beating New Zealand 28-21 in the Glasgow Sevens final. They are now in second place overall with one leg left to play, in London next weekend.

New Zealand have clinched the series but the race for second place is still on, as South Africa will aim to fight off a challenge from Fiji, who can still take second should they win the Cup final in London, and South Africa fail to make the quarter finals.

Victory for South Africa in Glasgow follows their win in Tokyo, and earlier win in Las Vegas. They are the only team to have no won three tournaments, beating New Zealand in the finals each time.

“They were the most consistent team this year and that is why they are the overall champions, so it is well deserved to them,” said coach Paul Treu of the Kiwis, before praising his young players.

“We arrived here without two of our playmakers (Branco du Preez and Cecil Afrika), but this just made the remaining players in the squad much more determined. We had to nurse a couple of players through this tournament, so it is very rewarding to see their hard work paying off,” he said.

Earlier in the day they beat the United States 22-5 in the Quarter Finals, and England 24-17 in the semis. England finished third after beating Wales in the playoff, while USA lifted the plate, Australia beat Kenya to claim the Bowl, and France beat Russia to take the Shield.