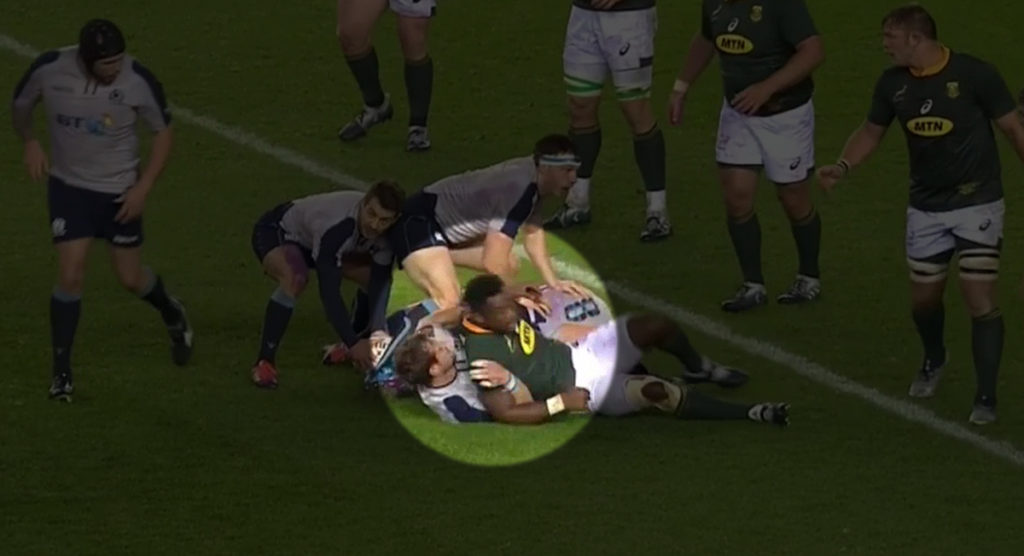 South Africa captain Siya Kolisi was thought to be in serious trouble after he appeared to headbutt Scotland’s Pete Horne in South Africa’s 26-20 victory at Murrayfield on Saturday. As there has been no sanction, South Africa will be relieved to have their skipper for their final international against Wales.

The moment occurred around the 30th minute and was somehow missed by Romain Poite and the entire officiating crew. Kolisi was cleared out of a ruck onto his back in a seemingly normal way but then flung his head back into the side of Horne’s head.

Springbok coach Rassie Erasmus said as much after the match: “I heard about it just after the game… I haven’t seen it. Look I am sure the citing commissioner will take a look and if there was anything serious and we are in the wrong‚ what comes our way we have to accept.”

Speaking of whether he believed the headbutt was intentional, Erasmus said: “I know him as a player and as a man so I’d be surprised.”

Sigh. See some websites are trying their best to get clickbait with the Siya Kolisi “headbutt” story. A headbutt is only a headbutt when it connects. What I saw was a player illegally being held on the ground that was frustrated. But hey, each to their own. Storm in a teacup

The flanker was being held at the time, so obviously took exception to it as he tried to get up to join the defensive line, but couldn’t.

World Rugby’s citing policy dictates that the citing commissioner has 24 hours from the final whistle to cite any incidents worthy of red cards. That would have meant the cutoff time was Sunday night.

Having reviewed the video angles, the Citing Commissioner determined that there were mitigating factors which meant that the action did not meet the red card threshold, including the player being illegally prevented from re-joining the play by Scotland’s Peter Horne and the moderate force of the strike to the side of the head. The match officials did not see the incident at the time on the field of play.

Citing Commissioner Warnings are issued for offences falling just short of a Red Card and, or similarly to cards, will form part of the player’s disciplinary record.