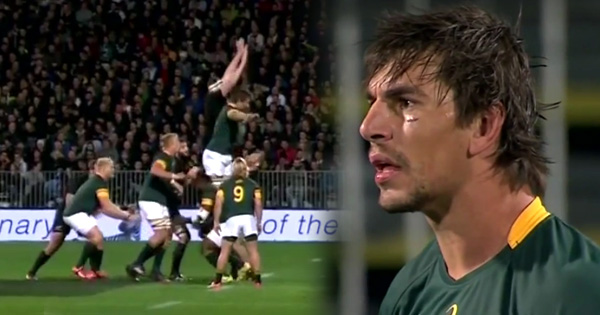 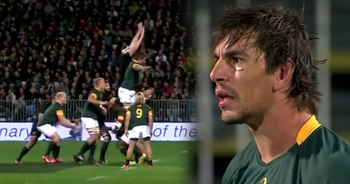 During Saturday night’s Rugby Championship clash in Christchurch the Springboks found themselves on the receiving end of a seldomly sanctioned lineout penalty, as Eben Etzebeth was found to have committed an early, or dummy, jump.

Referee Angus Gardner was quick to spot and whistle the infraction, but judging by the reaction to his call, the general attitude was one of confusion and surprise that such a call was enforced.

Perhaps a regular tactic with the intention of catching opponents unawares, and usually ignored by referees, but on this occassion it appeared obvious to Gardner who despite protestations, was adament that he had got it correct.

The Boks claimed that Etzebeth had only pretended to jump but as replays showed, he had indeed got off the ground, causing Brodie Retallick to get up himself.

Law 19.10 (f) “Jumping, supporting or lifting before the ball is thrown. A player must not jump or be lifted or supported before the ball has left the hands of the player throwing in.”

Chalk this one up to a general lack of knowledge regarding rules at the lineout, pushing the limit of what officials will tolerate, or perhaps simply bad timing.

Should the Springboks be shown some sympathy? Is there ever a legitimate excuse for not knowing such laws at this level?

The All Blacks went on to win the match 41-13, thus securing the 2016 Rugby Championship title.