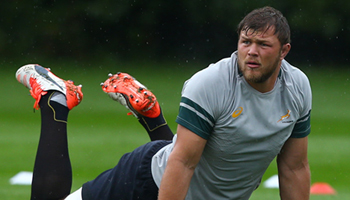 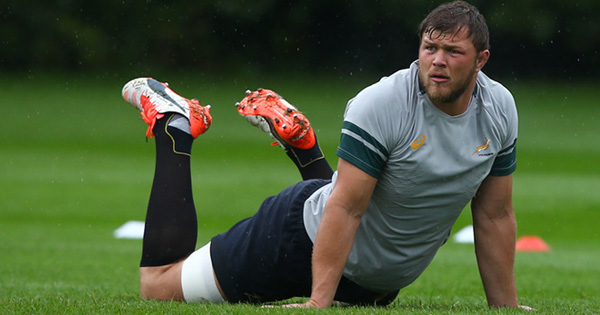 The Springboks have made eight changes to the starting line-up and included two new players on the bench to meet the challenge of a talented Samoan team in their second match of the Rugby World Cup at Villa Park in Birmingham on Saturday.

Adriaan Strauss, who will win his 50th cap, is the starting hooker, while Duane Vermeulen will make his first Test appearance of the year in the No 8 jersey as coach Heyneke Meyer reacted swiftly to the shock of defeat against Japan.

Willie le Roux, JP Pietersen and Damian De Allende return in the backline – with skipper Jean de Villiers shifting to outside centre – while there are new halfbacks in Handré Pollard and Fourie du Preez. In the pack, Eben Etzebeth returns to the starting line-up.

On the bench, Schalk Brits and Frans Malherbe make their first RWC appearances.

“It’s been a very tough week after the massive disappointment of last weekend and we owe our supporters a winning performance on Saturday,” said Meyer.

“The last few days have been a time for retrospection and the team this week has been selected specifically with Samoa in mind, as we know we’ll have to be at our very best to succeed.

“They will pose a massive challenge and I think it’s fair to say that it’s the biggest game of the season for us. They have a very strong team with players plying their trade all over the world.

“Four years ago in the World Cup pool match in New Zealand, the Samoans pushed the Boks close and we’re expecting more of the same this weekend. It will be brutally physical and we have to be 100% focused and ready.”

Meyer congratulated Strauss on his 50th cap: “Adriaan is not only a great ambassador for South Africa and the Springboks, but also someone who isn’t shy to put in the dirty work without saying too much.

“He leads by example and has shown a lot of resilience in coming through trying times. It’s well-deserved and a privilege only a very small percentage of Springboks have achieved. He is a true leader and was an inspirational vice-captain of this team in 2012 and 2013.”

Meyer said it’s also very good to see Vermeulen back in the team. It will be the current South African Rugby Player of the Year’s first Test of 2015 after he underwent neck surgery early in July.

“Duane has been one of the stalwarts of this team and it’s great to have him back in the mix,” said Meyer.

“He is one of the best loose forwards in the world and apart from being a superb ball-carrier and also a great line-out option, he is also good on the ground and brings leadership to the team.

“We decided to also give Willie, Damian, Frans and Schalk Brits, who was impressive in the second half against Argentina in Buenos Aires last month, a well-deserved run this week to bring some energy and unpredictability to the team. Jesse Kriel and Lood de Jager have proven themselves this season and we will need them to also make a massive impact off the bench on Saturday.

“It means some players have dropped out of the squad altogether but this is a 31-man campaign and they will have other chances, but we needed to make changes after Saturday’s performance.

Willem Alberts was the only player not considered because of injury – he picked up a calf strain during the captain’s run in Brighton last Friday and will be reassessed early next week.

•    This match will be the ninth Test between South Africa and Samoa since their first match 20 years ago in Johannesburg. The Springboks are still unbeaten against Samoa with an average score of 48-12. The closest Samoa has come to a victory was in the 2007 RWC in Albany, New Zealand. On that occasion the Springboks won a close fought match with 13-5.

•    In the very first match between the two countries in April 1995, the Springboks won with a 52 point margin (60-8). Twelve years later this record winning margin was repeated in France during RWC 2007.

•    The two countries had four encounters in RWC tournaments with the Springboks’ biggest win in 2007 in France (59-7). In this Test Bryan Habana crossed the try line four times. A Springbok RWC record shared with Chester Williams who scored four tries, also against Samoa, in 1995. Interesting to note that both players achieved their record from the left wing position.

•    The total Test caps for the Springbok starting line-up is 891 – a Springbok record yet again. The previous most experienced side (851 caps) played against Japan last week. Willem Alberts (33 caps) was a late withdrawal and was substituted with Pieter-Steph du Toit (4 caps).

•    Bryan Habana will extend his record as the most-capped Springbok wing, with 110 caps in this position. If he scores a try he will extend his own record of 59 Test tries for South Africa. Bryan also holds the Springbok record for most career tries (10) in RWC tournaments. Jonah Lomu of New Zealand is the RWC record holder with 15 career tries.

•    Jean de Villiers will extend his record as the most-capped Springbok centre with 93 caps in this position and will captain South Africa for the 37th time. Jean would then be the second most capped Springbok captain behind John Smit (83).

•    Victor Matfield will become the most capped Springbok against Samoa with five Test caps while he will also play in his record 125th Test match for South Africa.

•    The venue is Villa Park in Birmingham, home to Aston Villa Football Club since 1897. It has a capacity of just more than 42,500 seats. Apart from football, the stadium is also used for concerts, boxing matches as well as international rugby league and rugby union matches.