Springboks scrape through tough second Test with Argentina in Mendoza 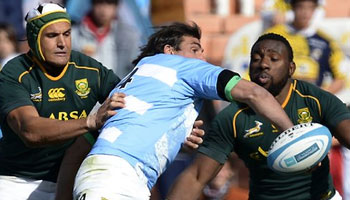 The Springboks stuttered to a 22-17 victory over a much improved Argentina side in Mendoza on Saturday. Last year they drew 16-16, and on this occasion it was the home side that looked ready to take the win, if it were not for two late Morne Steyn penalties.

Argentina, who were crushed 73-13 by the Springboks in Soweto last weekend, bounced back well and started the better of the two teams, scoring within two minutes of kickoff.

They matched up physically and chopped down the big Bok runners, and managed to counter the powerful lineout maul, a weapon the Springboks usually use with success.

“We did not play too well,” admitted Springboks skipper Jean de Villiers. “But let us give credit to Argentina for stopping us from imposing control over the game. I was hoping that we could play more expansively.

“The breakdown was a massive fight which both teams contested well, but we must sharpen up in that area before playing in Australia and New Zealand,” he added.

In what was a brutally physical match, tempers flared when Francois Louw claimed he was eye gouged, and Eben Etzebeth alerted referee Steve Walsh to bite marks on his arm. An interesting few minutes followed as Walsh said he will get the citing commisioner to look at it, but De Villiers said they’d rather have the benefit of the punishment during the match.

At that moment, the communications with the TMO failed, so there was no further action. Argentina number eight Leonardo Senatore has since been cited, as the citing commissioner deemed the biting incident to have met the red-card threshold for foul play.

The Springboks and All Blacks both have 9 points, but the Boks are top of the Rugby Championship table due to points difference. Argentina have a single point, while the Wallabies have zero.