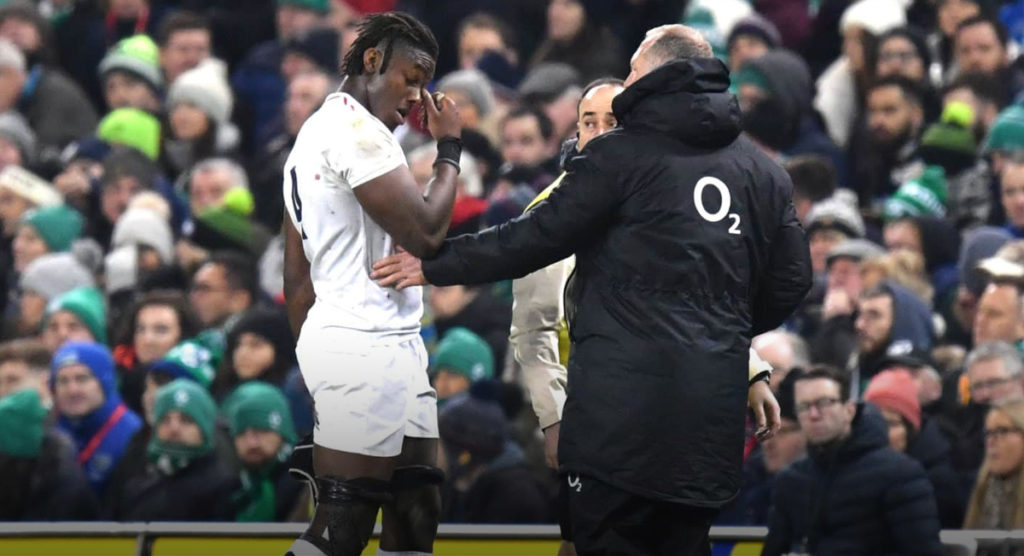 England fans are remaining positive after the news emerged that second row Maro Itoje is set to miss a large chunk of the Six Nations. Today, Eddie Jones named his 35-man squad for their next match.

The 24-year-old limped off the field in the second half against Ireland on Saturday, and was seen on crutches after the game. He could make it back for the final game on the championship, but that remains unclear. This comes after he had only recently made his return from another knee injury, and will now face another frustrating spell on the sidelines.

It was confirmed that he suffered a knee ligament injury and is expected to only be available towards the end of the tournament.

The Saracen will certainly be missed in the coming matches, as he was putting in a performance that the England fans have grown accustomed to before he exited the field.

Barring his erroneous challenge on Keith Earls in the first half of the match, Itoje was a persistent thorn in Ireland’s side, causing havoc at the breakdown and typifying his team’s ruthless defensive effort.

However, a number of fans have pointed out on Twitter that England’s depth in locks means that they can survive without Itoje. Eddie Jones has long been an admirer of the second-rows that he has at his disposal, and has struggled to land on the two that are his favourite. While Itoje gets the nod usually from the Australian, his partner has frequently varied.

This has sometimes been due to injuries, but equally down to the form of each player.

In Itoje’s absence, Joe Launchbury will come back into the squad to partner George Kruis, while equally, Courtney Lawes could also play the required role.

The Northampton forward made a very good account of himself when he came on in the latter stages in Dublin, throwing his body around and putting in some huge hits in defence. While he still may remain an impact substitution, or ‘finisher’, England certainly would not be weakened if he started.

Today it was confirmed that Saracens’ Nick Isiekwe has joined the 35-man squad in Itoje’s place.

With that depth, it’s unlikely that the team will be under strength when they host France at Twickenham this coming Sunday.

This is what the fans had to say on the Itoje injury:

Itoje a huge loss for the #SixNations but will good to see the rest of England's locks battle it out. Such strength in that position.

Itoje out of the rest of the six nations. However looking at our second row options, we are very lucky! Kruis and Launch to start against France, Lawes as impact again?

Best 2nd row in the world limps off #Itoje

Maro Itoje sidelined with a knee injury. No problem. Courtney Lawes will be swatting flyhalves like flies.

Itoje is a huge loss and would be for any side….however IMO england have the best second row cover in international rugby, Launchbury and Lawes both able to step in.