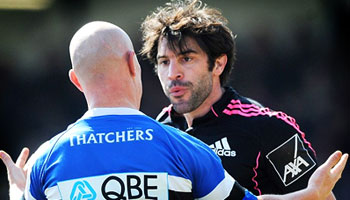 Bath crashed out of the Amlin Challenge Cup with a 36-20 quarter final loss to Stade Francais at the Rec on Saturday, but it was a shocking spitting incident in the first half that claimed all the headlines. Peter Stringer has since said that he was ‘disgusted’.

Stade Francais scored some lovely tries in their dismantling of the home side but this incident soured affairs regardless of the result. It occured when Stringer and Fillol got in a bit of a tangle after the whistle, and despite competitive tussles between halfbacks being the norm, there appeared to be no real reason for such a filthy reaction.

After the game Stringer said: “Obviously it is a bit raw at the moment, but it happened on the pitch and there is no place in the game for it. That’s as low as you can probably go. When you are on the end of something like that you are rattled by it, but try not to dwell on it. It’s out of my hands now.”

The former Ireland number nine was livid but kept his cool, telling referee Nigel Owens what happened. Owens’ response was something along the lines of “I can only deal with what I see”.

Fans will be hoping appropriate action is taken, which we will find out about tomorrow. Independant citing officer Eugene Ryan, from Ireland, has 50 hours from kick-off to make his decision.

Brett Gosper, CEO of the International Rugby Board (IRB) Tweeted: “Spitting on Stringer should be punished to the full extent of the law. #NotRugby”

UPDATE: Fillol has been suspended for 14 weeks. Read all the hearing details here