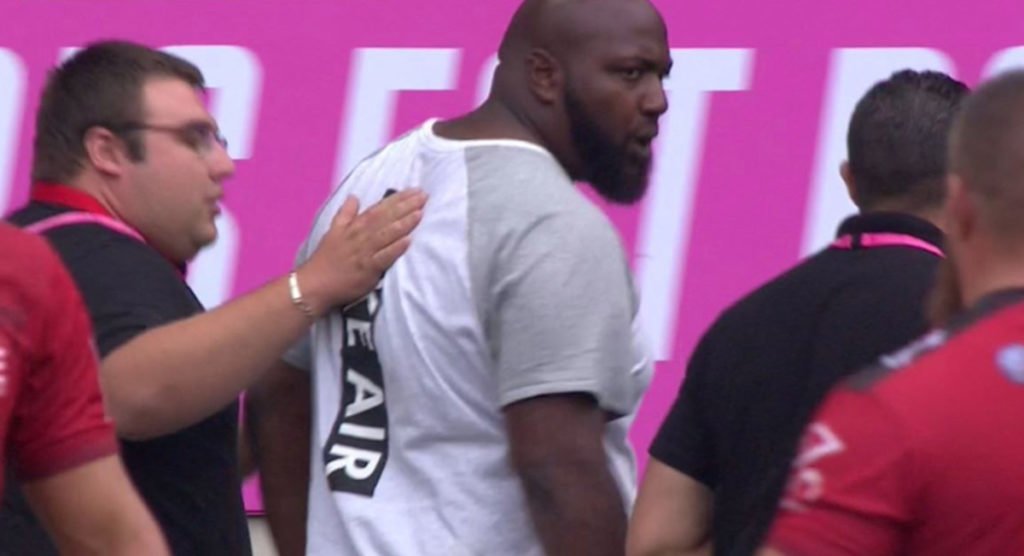 Stade Francais’s 37-10 win over Toulon on Sunday got slightly out of hand in the second half as the two teams grappled after a clash between Sekou Macalou and Julian Savea. Moments later, a fan – later identified as the brother of Macalou – sauntered onto the pitch to join the fray.

Due to the troublesome family loyalty, Stade now face a hefty fine and possible stadium ban.

Most sports have to deal with pitch invaders from time to time. For obvious reasons, there are strict policies about staying in the stands. No one knows the mental stability of someone who finds their way onto the playing surface in the middle of a match.

In this particular case, a man wearing a white outfit walked onto the pitch and up into the middle of a fracas between the two sides.

Sekou can be seen gesturing for him to get off the pitch. This makes sense now that we know the two are related. In hindsight, it appears that perhaps the players knew who he was. Otherwise, he might have received the Piet van Zyl treatment.

Who knows what he was thinking. Thankfully the extremely large Macalou brother kept his hands off the players and officials. Aside from a shove or two, he was led away without much incident. For their part in the fight, both Macalou and Savea were awarded a yellow card.

This wasn’t the only bizarre incident of the weekend, coming after Argentina beat Australia and a fan got in a verbal and physical encounter with Lukhan Tui.