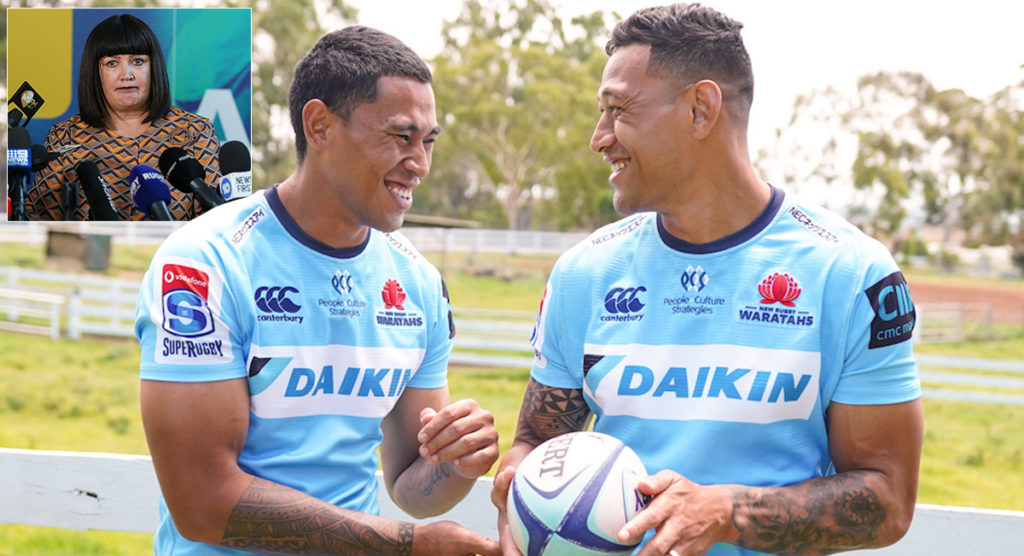 It’s been another turbulent day in Australian rugby as Israel Folau has filed to take on Rugby Australia over the ‘unlawful’ termination of his contract, and his brother has been released from the Waratahs.

After being sacked last month for his social media posts, Folau today launched a claim with Australia’s Fair Work Commission, stating that his employment was terminated because of his religion.

“No Australian of any faith should be fired for practising their religion,” he said in a statement. “Ours is an amazing country built on important principles, including freedom of religion. A nation made up of so many different faiths and cultural backgrounds will never be truly rich unless this freedom applies to all of us.”

He is reportedly seeking up to A$10 million in compensation.

“The termination has cost Mr Folau the best years of his rugby career, participation at the Rugby World Cup, the chance to become the greatest Wallaby try-scorer (a decades-old record he was likely to break), and the associated exposure and opportunities,” Folau’s application stated.

“As well as around A$5 million in lost salary, Mr Folau will claim in respect of the loss of these opportunities (renewal of contract, sponsorships, etc). The damages will be particularised in due course, but will be substantial. In addition, Mr Folau will seek civil penalties.”

He is challenging his ‘wrongful’ termination under section 772 of the Fair Work Act, which prohibits an individual’s employment to be terminated on the basis of religion.

Rugby Australia, in a joint statement with the NSW Rugby Union, issued a statement defending their decision to terminate his contract.

“Rugby Australia and the NSW Rugby Union made the decision to pursue the termination of Israel Folau’s contract because of a serious breach of the Professional Players Code of Conduct.

“This is an issue of an employee and his obligations to his employers within the contract that he signed. He was bound by a Code of Conduct for all professional players in Australia that spells out clear guidelines and obligations regarding player behaviour, including respectful use of social media.

“An independent panel, having sat for 22 hours and heard testimony from several witnesses and reviewed over 1000 pages of evidence, determined that Israel’s conduct constituted a high-level breach of the Code of Conduct and ordered termination of his playing contract.

“It is important to make clear that Rugby Australia and NSW Rugby did not choose to be in a position where they are forced to divert significant resources to defend the ongoing legal action taken by Israel, but his action leaves the game with no choice.

“As a sport that is proud of the values of inclusion, passion, integrity, discipline, respect and teamwork that underpin our game globally and our Code of Conduct, we will defend those values and the right for all people to feel safe and welcome in our game regardless of their gender, race, background, religion or sexuality.

“We are grateful for the support from so many people from within our Rugby community, including the volunteers who are the guardians of the game’s values, from other sports and from the wider community here and around the world, who have supported our stance.

“We will remain focused on getting on with the job of building our game, supporting our teams, encouraging more people to play Rugby and upholding the values that generations of Wallabies and Waratahs have represented with pride.”

Meanwhile his younger brother, 24-year-old John Folau, has left the Waratahs after joining last year from the NRL. He played for the emerging Waratahs but never made it onto the field in a Super Rugby game, despite being on the bench against the Sunwolves this season.

After his older brother was sacked, he returned to training but took time to consider his future.

“Obviously John’s been in a difficult position for the last wee while, he’s got really divided loyalties to his family obviously and his brother, but then also to the team,” said coach Daryl Gibson.

Also, Tolu Latu is yet to find out if he will be cleared to play after pleading guilty to a drink driving charge.