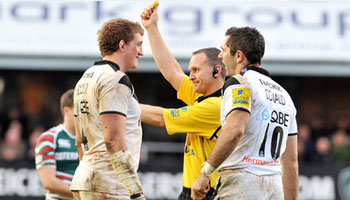 The referee took that one further and told the World Cup winner that he had thrown punches, which as you can see, Donald wasn’t too amused with.

This happened shortly after Matt Banahan and Brett Deacon were red carded for a high tackle and punch respectively. Francois Louw was also sent off in what was a tempestuous second half.

View the other incidents here