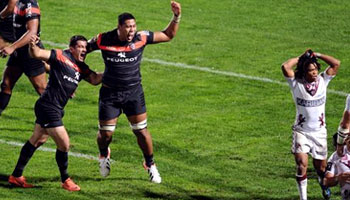 Toulouse came from behind to record a 34-32 injury-time win over Bordeaux-Begles on Saturday, following an incredible series of reset scrums. The referee eventually awarded a penalty try, which was casually converted by Luke McAlister for the win.

Bordeaux were heading for a famous victory after great play from Metuisela Talebula in particular, as he contributed to their first try – scored by Blair Connor – and then scored two of his own.

Toulouse trailed 29-10 and Bordeaux looked good, but Timoci Matanavou scored a late brace of tries, and then with time almost up, the visitors got a scrum 5 meters out.

They powered through the hosts, and while the referee tried his best to not have a huge bearing on the outcome of the game, a yellow card in the front row and then a penalty try followed after an incredible seventh scrum reset, six minutes into extra time.

“I haven’t seen that kind of scenario very often. But it’s not miraculous because the players deserved to be in that position and were putting Bordeaux under pressure,” said Toulouse backs coach and former player, Jean-Baptiste Elissalde.

Other than the bizarre finish, there was sensational play throughout, with positive running and great bits of skill all over the park. If you have nine minutes to spare, make sure you watch this one.