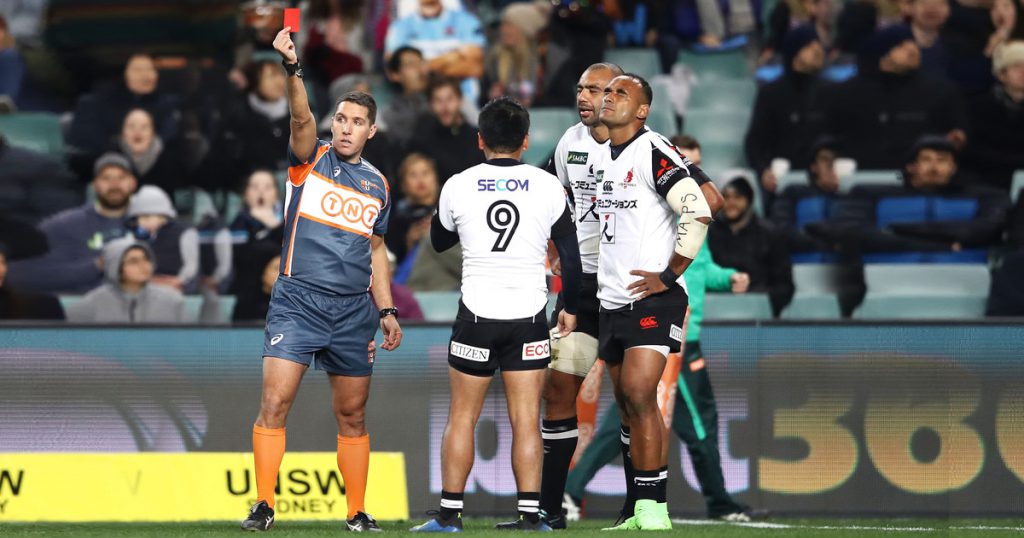 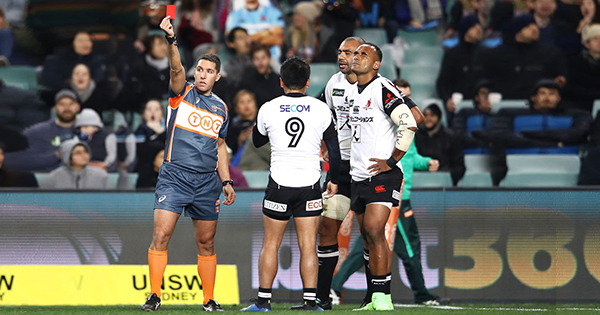 Sunwolves winger Semisi Masirewa will miss the rest of the Super Rugby season after he was sent off for a dangerous tackle on Bernard Foley. The game was evenly poised at the time, but then floodgates opened, and the Waratahs won 77-25.

Masirewa was red carded just before half time, in what has been called a pivotal moment in the match.

His dangerous tackle on Foley, in which the Waratahs playmaker landed head first, led to a straight sending off and a subsequent disciplinary hearing.

Sunwolves coach Tony Brown felt there wasn’t much in it.

“I don’t think there’s any intent in there. It was just unfortunate,” he said post match.

“I think it was Steve Hansen that said we should just put players on report, like they do in [rugby] League, and play on.”

Waratahs coach Darryl Gibson concurred with that approach. “I certainly support that, the effect that it [the red card] has on the game takes away from the contest.

“In that [particular] instance, the referee has no option. He’s following to the letter of the law and that’s what he’s required to do. Having an intermediary step that’s not quite a red card – give him some options – sensible.”

He was charged with contravening Law 9.18: A player must not lift an opponent off the ground and drop or drive that player so that their head and/or upper body make contact with the ground.

“Having conducted a detailed review of all the available evidence, including all camera angles and a statement from the player and submissions from his legal representative, Maryjane Crabtree, the Foul Play Review Committee upheld the Red Card under Law 9.18.

“With respect to sanction the Foul Play Review Committee deemed the act of foul play merited a low-end entry point of 6 weeks. However, taking into account mitigating factors including the Player’s good judicial record, his immediate and repeated apology to the other player, his remorse and his guilty plea at the earliest possible convenience, the Foul Play Review Committee reduced the suspension to 3 weeks.”

The Waratahs’ convincing victory took them to second in the table behind the Crusaders.

Watch another angle of the challenge in this video: