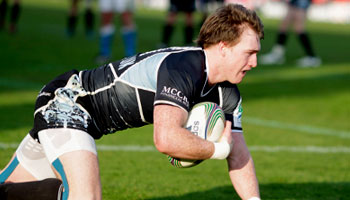 Teenager Stuart Hogg scored an impressive hat-trick of tries to earn Glasgow Warriors a losing bonus point in their RaboDirect Pro 12 game against Munster last weekend. The home side, playing at Musgrave Park on Saturday night, won the game 35-29.

Ian Keatley scored 20 points while Luke O’Dea and Peter O’Mahony crossed for tries, but it was 19 year-old Scotland sensation Hogg that caught the eye, scoring his third try on fulltime.

“Stuart Hogg was outstanding, as an individual effort in attack he was fantastic, it was just disappointing that we couldn’t back it up with a good defensive display,” said coach Sean Lineen.

“The first try was a brilliant solo effort and the second, when he took a lovely pass from Colin Shaw, was an absolute beauty. We showed some tremendous character in that second half to come back and take a losing bonus point, but Stuart took his tries really well.”

Glasgow must win their next two games, against Treviso on Sunday and then Connacht on May 5, to qualify for the play-offs. Lineen says that they are happy with the bonus point, but can’t underestimate the Italian side this coming weekend.

“To take that away from Munster is a great display and it gives us a lot of positives to work on going into Treviso next week. It is going to be incredibly hard – they are a very impressive team, well drilled and very experienced,” he said.

Below are the three tries that Hogg scored, not only because they were requested all through the week, but because they’re pretty decent, and the young man clearly has bags of talent.