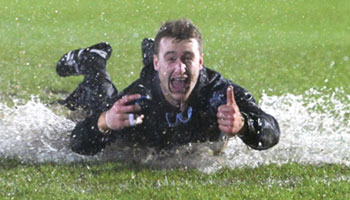 Wednesday night’s 1872 Cup game between Glasgow Warriors and Edinburgh was postponed due to a waterlogged pitch after heavy rains at Scotstoun. The players stood around aimlessly for a while before Stuart Hogg decided to pose for one of the best photo opportunities of the new year.

The game was called off less than 90 minutes before kick-off after the heavy downpour. Officials gave it as long as possible to try and play the match, but it wasn’t possible.

Young flyer Hogg, who had a fantastic 2013 that included a spot on the British & Irish Lions tour, decided to put a smile on some of the loyal supporters’ faces with this great swallow dive.

“Disappointed that the game was called off y’day. Had to make some fun of it though” Hogg tweeted.