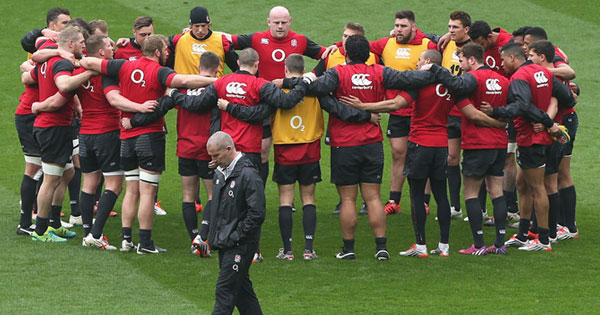 With England’s final Six Nations game against France coming up on Saturday, Head Coach Stuart Lancaster has been talking to the press ahead of what could be their biggest game yet.

England have made one change to their match-day squad with second row Geoff Parling replacing Dave Attwood, who is dropped out of the match-day twenty two, while Nick Easter moves up onto the bench. The consistency in selection will see prop Dan Cole make his 50th appearance

Lancaster stated that England “have benefited from consistency of selection. Our numbers in the Six Nations this time around have been very similar to last time, very low, sub 30”.

On top of this Lancaster has stated that he is confident “that if we [England] put our game on the park, we can cause France problems”.

Lancaster went on to talk about how England are preparing psychologically for the game and how important the Twickenham crowd will be in that. He did also note that England are weary of the French and their solid defence, which has only conceded two tries so far this tournament.

Lancaster has said that England’s mindset going into the game will be “To go for the win. We cant sit and hope that we can hang in there, we have to go front foot mentality”.

On his decision to drop Attwood, Lancaster said that he believes Nick Easter will make a stronger impact from the bench and that Parling will provide a great deal of experience to England’s pack.

Winger Jack Nowell will also be hoping to build upon his impressive performance last week against Scotland, and has made it known of the ‘massive honour’ to be selected for what is a crucial game.

Nowell is also aware of the pressure that the other England wingers, Jonny May and Anthony Watson, can put on his place in the team, but is keen to stay on top of his game.

With England’s clash with France being the last of the day, they will go out knowing exactly what they need points wise in order to lift the trophy. Saturday promises to be a bumper day and one that is sure to have many twists and turns as it goes on.

All the implications of the results, and some nice videos, in our Six Nations final round preview.