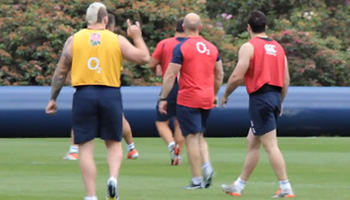 England head coach Stuart Lancaster spoke to the media on the day that his Rugby World Cup training squad ran out onto the training field for the first time as one group. He addressed David Strettle’s withdrawal and what he expects over the next seven weeks.

The Saracens winger withdrew from the squad after chosing to rather spend time relocating in France, where he has joined Top 14 finalists, Clermont, on a three year deal.

The 31-year-old, who won the Premiership title with Saracens last month, said in a statement:

“The opportunity to join Clermont and the subsequent decision to leave Saracens obviously was difficult and not one I have taken lightly.

“Having now committed to a three-year move at what I feel is the right time in my career and for my family, I would like to begin that challenge right away. With the England training camp beginning this week I wanted to be fair to Stuart and the rest of the squad before that started.”

Lancaster said Strettle’s decision was ‘disappointing’ but explained that Bath’s Semesa Rokoduguni has been called up.