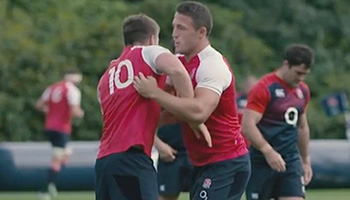 England announced their 2015 Rugby World Cup squad today, with some unlucky to miss out, but still in the running in terms of a wider training group should injuries occur. Hear directly from Stuart Lancaster above as he talks about his selections.

The 31-strong group of 17 forwards and 14 backs – drawn from eight Premiership clubs – will open their campaign against Fiji at Twickenham Stadium on September 18.

England Head Coach Stuart Lancaster said: “It’s really positive that we have such depth and options to choose from. Selection wasn’t easy and it is tough to leave anyone out but it’s important to stress that the players not in this group are still part of our wider squad and could come in at any point.

“After 10 weeks in camp we have made our final selection of players and we believe we have a great group to take us into the tournament. With three weeks to go before we play Fiji we believe we are in good shape as we head into next Saturday’s game against Ireland.”