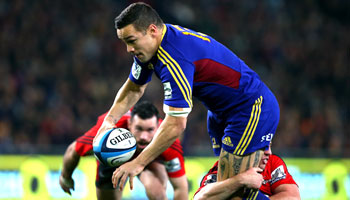 Despite going down 40-12 to the Crusaders in Dunedin, the Highlanders scored first through a piece of individual brilliance from Tamati Ellison, that resulted in a try for Ben Smith. It was just one of many great moments in an eventful Super Rugby game.

The Highlanders took the lead through Smith early in the game and when Hosea Gear scored later, they seemed in with a shout. However the red card sending off of Ma’a Nonu, for a spear tackle, didn’t do them any favours and the Crusaders ran away with things.

Early on it was all about that Ellison pass though, as he got the ball under pressure, fended with one hand in the tackle then spun around to pull off one of the greatest passes of the season, if not ever.

“I don’t care what you call it, that’s the greatest pass I think I’ve ever seen,” said commentator Scotty Sumo Stevenson live on air.

The former All Black was humble when reacting to it on Twitter, giving credit to Smith.

“You can throw anything at @bensmithotago and he will score!” said the centre.

Obviously it was all about the Crusaders on the night, who were outstanding and scored some great tries of their own, but this Ellison pass really was a thing of beauty.

While the Lions tour of Australia is obviously big news right now, if there was any action you spotted in Super Rugby or at the RWC Sevens that you think should be shared on here, please get in touch by dropping us an email, tweeting, or leaving a request on the forum.