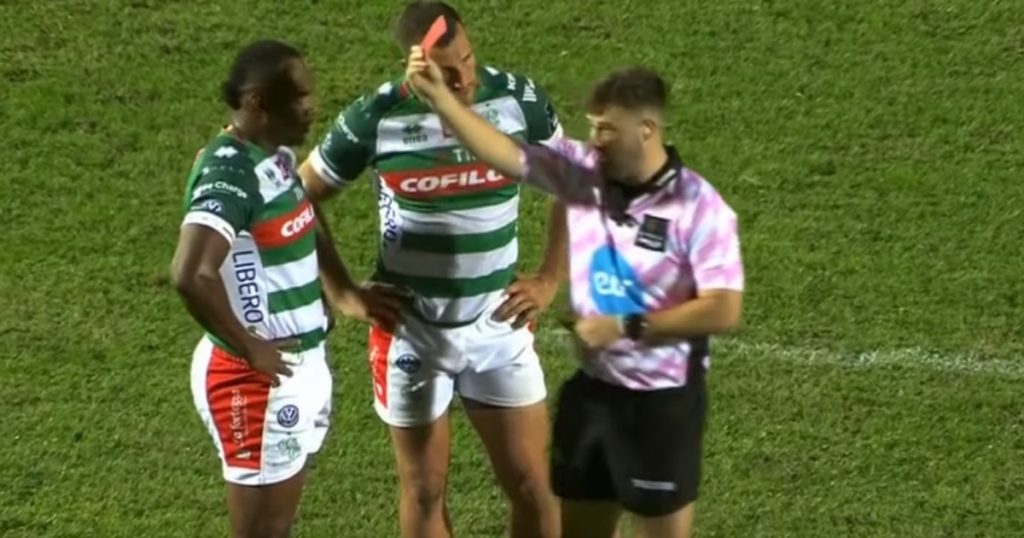 Reigning Pro 14 champions Leinster kicked off their title defence with a narrow 32-27 win away to Benetton last weekend, who finished the match with 14-men after winger Iliesa Tavuyara was sent off for taking out Dave Kearney in the air.

The incident divided opinion as Tavuyara also appeared to be struck by the knee of Kearney in the process of jumping for the ball. Nevertheless, referee Ben Whitehouse gave Tavuyara his marching orders just eight minutes into the second half.

It had been a tight encounter with the scores level at 17-17, so Tavuyara’s exclusion came at a critical point in the match.

No doubt Tavuyara was not in a position to catch the ball and did take Kearney out in the air, with the Leinster winger needing to place his arm out to prevent himself landing on his head.

Whitehouse took this into consideration when dealing with his Television match Official and deemed that, had Kearney not stretched his arm out, he would have otherwise landed on his head, thus warranting a red card.

However, on close inspection of replays, it is clear that Tavuyara was himself struck by Kearney’s leading knee as the latter competed for the high ball, with officials seemingly missing the contact.

While Tavuyara’s sending off may well have been warranted, no action was taken on Kearney as it appears to be an acceptable technique for taking high balls.

Initially, Tavuyara’s expulsion didn’t seem to have much effect on a Benetton side which has shown vast improvements over the past 18 months. Indeed, the responded in perfect fashion by scoring through Luca Sperandio.

Leinster hit back, ironically through a Kearney try to move the visitors back into the 29-27, before a Ross Byrne penalty sealed the victory.