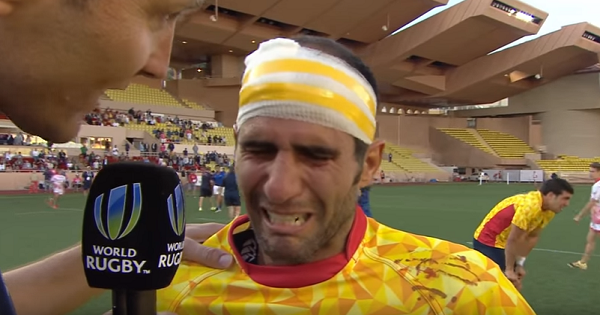 In case you missed it, Spain managed to become the final team to qualify for the Rio Olympics, thanks to a last second try against Samoa. It all became a bit too much for the Spanish captain Pablo Feijoo who broke down in tears in the post-match interview.

The Women’s team have actually also secured their place at the games, by defeating Russia 19-12 in the UCD 7s tournament in Dublin.

The men qualified in dramatic fashion. Trailing 12-14 to Samoa in the final qualification game, the Spaniards managed to battle back to 17-19 before Ignacio Martin Goenaga finished off a lovely try to send his country to Brazil. Cue intense celebrations and lots of tears.

“It’s amazing,” said Pablo Feijoo. “These lads work the entire year for this tournament…they play with their heart. I can’t believe it. Some of us have worked 15 years for this, many people in Spain believed in us… this is the result of a dream.

For the Women, Patricia Garcia said they found motivation in the Men’s team.

“Our men qualifying last week has been the inspiration for us all week. We took their example with the teamwork we showed. I am pretty emotional but with smiles, not tears.”

View highlights from the Women’s final below