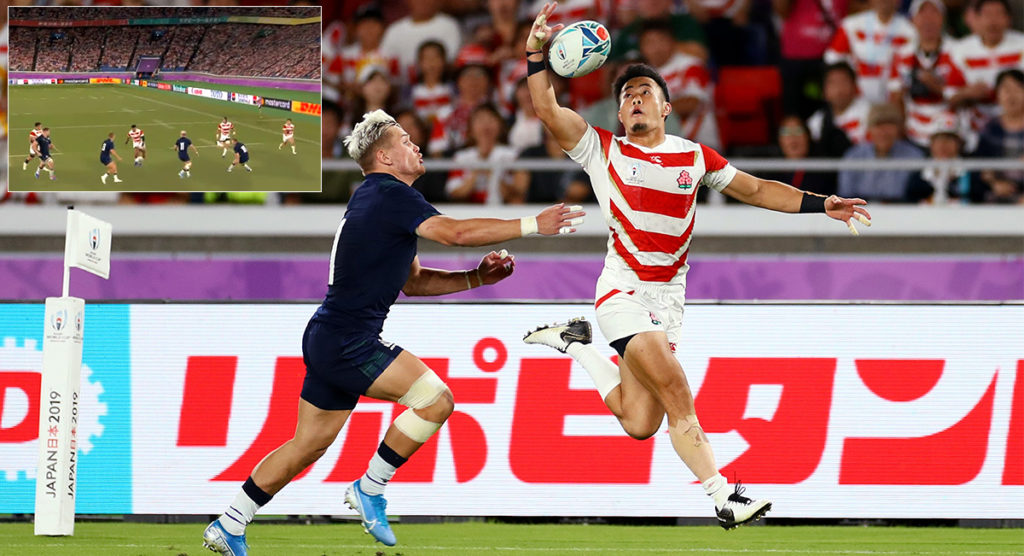 One of the greatest innovations this Rugby World Cup has seen is the new technology that has allowed Canon to recreate tries at angles that the world has previously not seen.

This has been done by using footage from multiple fixed cameras around the stadium then stitching them together to create a unique perspective of tries scored.

This was first exhibited after the All Blacks’ victory over the Springboks, where George Bridge’s try and the build-up play from the All Blacks was shown from these sweeping angles that are at the centre of the action.

Canon have now released another video of Kenki Fukuoka’s first try against Scotland in Yokohama on Sunday in their historic victory.

The video captures Timothy Lafaele’s deft grubber kick that was chased down by player of the match Fukuoka, and sees the winger face on charging towards the line in one of the most memorable tries of the competition.

This try on 39 minutes looked to be the final nail in the coffin for Scotland, as it gave Japan a 21-7 lead at half time. A try very soon after the break to Fukuoka again meant it was a mammoth task for Scotland to qualify for the quarter-finals, and although they mounted a comeback, Japan were able to secure their first ever play-off spot at a RWC.

This was Fukuoka’s first start of the tournament after sustaining a calf injury against South Africa in the warm-up Tests. He is bound to start in the quarter-final against the same opponents, as Japan seek to continue making history at their own Rugby World Cup.

You can also watch another of Japan’s tries from the same cameras, displaying their brilliant offloading.