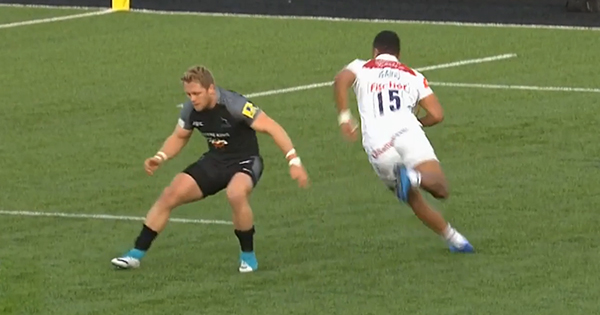 Fresh off the back of scoring a hat-trick against Castres, Leicester Tigers flyer Telusa Veainu crossed for this outstanding try against Newcastle Falcons in the Aviva Premiership. It was the opening try in the Tigers’ 30-13 victory at Kingston Park.

The three-try win moves them to third place in the league table.

Veainu’s excellent try was his fifth of the season and fourth in two games. He beat three men on the way to the tryline, first getting past Sinoti Sinoti before doing Alex Tait with an almighty step, then shifting the other way, back inside past Vereniki Goneva and Sonatane Takulua.

Veainu now holds the league lead for the highest number of offloads for the season, at 12, and after beating 10 defenders in the game, he leads that stat for the season too. He has now beaten 34 defenders, six more than Semesa Rokoduguni and nine more than teammate Jonny May.

This try has been shortlisted for the Aviva Premiership Try of the Week, which is included below.

Citizen Try of the Week shortlist – Round 7