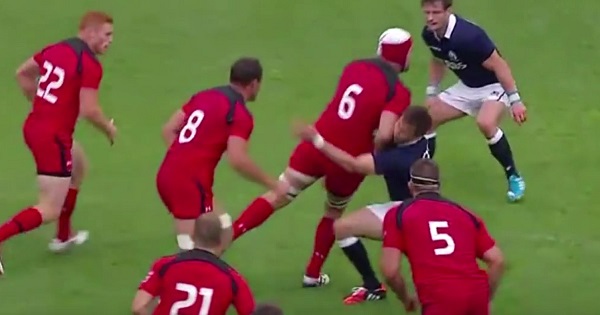 This weekend sees Scotland and Canada face off against each other for the first time since their infamous meeting in Toronto four years ago, in which the Scots won 19-17. The occasion was marred late in the game by a highly controversial decision.

It was an incredibly tight affair with the home side having a penalty opportunity to claim a shock victory with five minutes of the match remaining.

However, the Canadians had their flanker Jebb Sinclair red carded for allegedly “leading with the arm” as he attacked the Scottish defensive line.

It was a bizarre, albeit unfortunate, incident which injured Scotland replacement Ruaridh Jackson and reversed the penalty decision after referee Mike Fraser consulted his TMO.

Sinclair’s exclusion caused much debate and anger at the time and was one of the first cases of the more severe sanctions for head contact in the game.

This debate centred around the positioning of Jackson’s head in the tackle, with local commentators remarking that “the player [Jackson] put himself in a vulnerable position by trying to tackle a bigger man”, therefore making the impact appear more serious than it was.

No doubt, the Canadians felt hard done by, but they will have another chance of redemption this weekend at the Commonwealth Stadium in Edmonton.

It’s a much changed Scotland squad turning out on Saturday, with both Harlequins centre James Lang and Edinburgh back-rower Jamie Ritchie making their first starts.

There is also a chance for Adam Hastings – son of Scottish legend Gavin – to debut from the bench as the Scots kick off their summer international series.