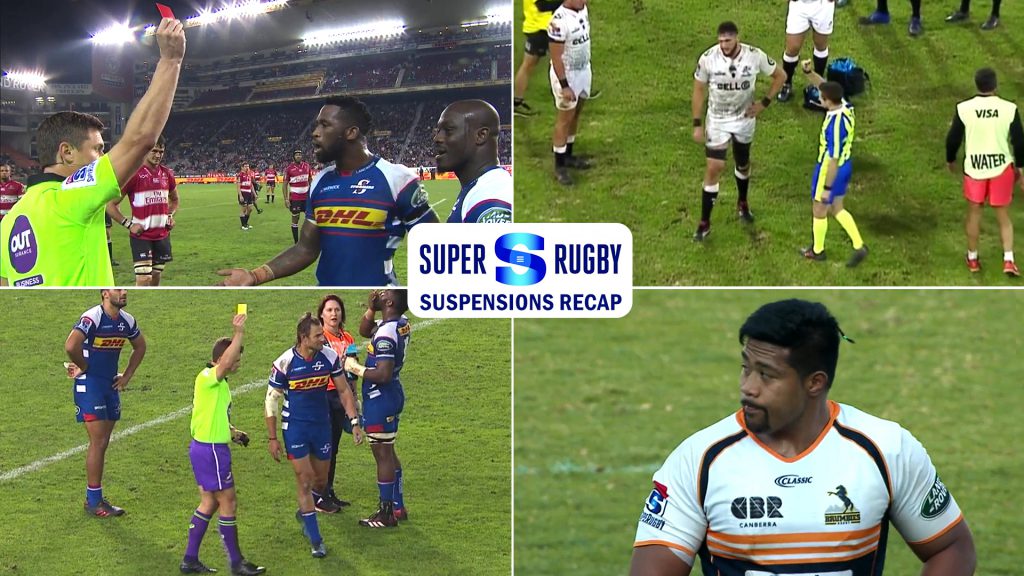 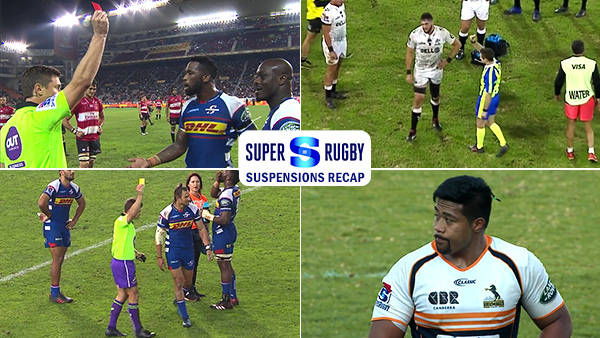 Ahead of the weekend, here’s a quick recap of what happened in the last round of Super Rugby, with four much talked about suspensions for various elements of foul play. We’ve thrown them into one video for you, and given a brief recap of the bans handed out.

The Stormers vs Lions game featured a number of interesting calls, the biggest of which was winger Raymond Rhule’s red card for a dangerous challenge on Ruan Combrinck.

It looked harsh, as Rhule had jumped up and had to come down. But when it came down to it, he was reckless and his shoulder did make contact with the Lions winger’s chin.

Rhule was cited and later pleaded guilty to contravening Law 9.25: A player must not intentionally charge or obstruct an opponent who has just kicked the ball.

“With respect to sanction the Foul Play Review Committee deemed the act of foul play merited a mid-range entry point of 6 weeks, especially given that that act resulted in a blow to the opposing player’s head. However, taking into account mitigating factors including the Player’s excellent Judicial record, his good character and his early guilty plea at the first available opportunity, the Foul Play Review Committee reduced the suspension to 3 weeks.”

In the same match, JJ Engelbrecht received a yellow card for a dangerous, lifting tackle. Later in the match he was penalised for a (maybe two?) dangerous clean out at the breakdown, so was issued a citing commissioner’s warning.

SANZAAR Disciplinary Rule 6.1 states:
“6.1: If a Player has received two Warnings or a combination of a Warning and a Yellow Card during a match, he shall be treated for disciplinary purposes as if he has been sent off.”

Englebrecht has been suspended from all forms of the game for 1 week, up to and including 2 June 2018.

In the Jaguares vs Sharks game, second rower Ruan Botha was issued a straight red card for a dangerous charge into a ruck. He was cited for contravening Law 9.12: Striking with hand or arm.

Botha has been suspended from all forms of the game for 4 weeks, up to and including 23 June 2018.

“With respect to sanction the Foul Play Review Committee deemed the act of foul play merited a mid range entry point of 4 weeks due to the contact with the opposing Player’s head.”

“The Foul Play Review Committee added 1 week to the initial sanction as aggravation for the fact the Player was suspended for a similar incident less then 12 months prior. However, taking into account the mitigating factor of the Player’s guilty plea at the first available opportunity, the Foul Play Review Committee reduced the suspension to 4 weeks,” the hearing ruled.

In the head butting incident that we featured here earlier in the week, Brumbies hooker Folau Faainga’a was red carded for getting up close and personal with Bulls replacement forward Matthys Basson, who was making his Super Rugby debut.

Faainga’a dived ‘into the pool’ then got up and a scuffle ensued, with the Brumbies man getting face to face with Basson, where forehead made contact with nose.

A straight red card was issued, and he was later suspended for one week.