The Best Tries scored in Round 4 of Super Rugby 2014 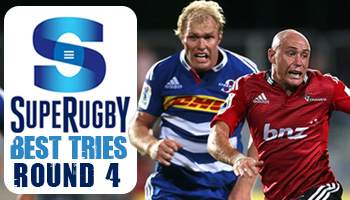 Above is a quick round up of the best tries scored in Round 4 of Super Rugby this past weekend. There are six in total, scored by the Brumbies, Cheetahs, Reds, Stormers, Force and Sharks respectively. The Sharks stay top of the overall and South African conference logs.

After four rounds of play, the top points scorers are all goal kickers, with impressive Lions back Marnitz Boshoff out ahead of the pack on 70 points, followed by Johan Goosen on 42 and Jaques-Louis Potgieter on 41. Of those three, Potgieter is the only player to have scored a try.