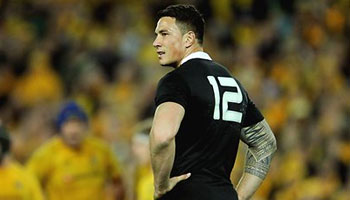 Sonny Bill Williams played his final game for the All Blacks on the weekend, for now anyway. Against the Wallabies he went up another level, earning the respect of the naysayers. Japan beckons though, and then he’s off the to the NRL, but will he be back?

Williams has made giant strides in the few years he’s been playing professional rugby union. Each time he plays, he gets better, and on Saturday he pulled out the full bag of tricks.

Its no coincidence that his trophy cabinet is overflowing with achievements. Forget about his boxing title, that’s still up for discussion, but in union, he’s won pretty much all he can; the Ranfurly Shiled, ITM Cup, Super Rugby title, Bledisloe Cup, and of course, the Rugby World Cup.

His ability to offload the ball was his main feature, but the maturity he’s shown of late – knowing when to hold on and when to release a supporting runner – has made him a lethal threat in the midfield. You can only imagine what kind of damage he will cause in Japan over the next season.

While his loyalty has been questioned, the irony is that he is leaving the country that embraced him to play rugby league based on a handshake deal he made three years ago.

“I wish I could say ‘nah, I’ll stay’. It is pretty emotional,” he said after the Bledisloe Cup victory.

“A lot of people are hitting me up, asking why I’m leaving, but three years ago I didn’t even know if I could play rugby. It was good to have the security of knowing in three years’ time I had a job in rugby league. Now I understand rugby I’ve got the utmost respect for the game.”

His parting comment is that while he’ll be lost to the game for a while, he may well add to his tally of 19 Test caps in the not too distant future.

“If things don’t work out over there as well as I hope then maybe I might be back here, but who knows what is going to happen?” he added.

Coach Steve Hansen had the final word, touching on SBW’s critics, and his possible return to rugby.

“I’d be confident enough to say that I don’t think it’s the last time he will play for the All Blacks, either. I think he will come back,” Hansen said.

Below is an amusing short piece from New Zealand show The Crowd Goes Wild, featuring James McOnie spending a bit of time with Williams before his departure.

Do you think his performance against the Wallabies was his best yet for the All Blacks?