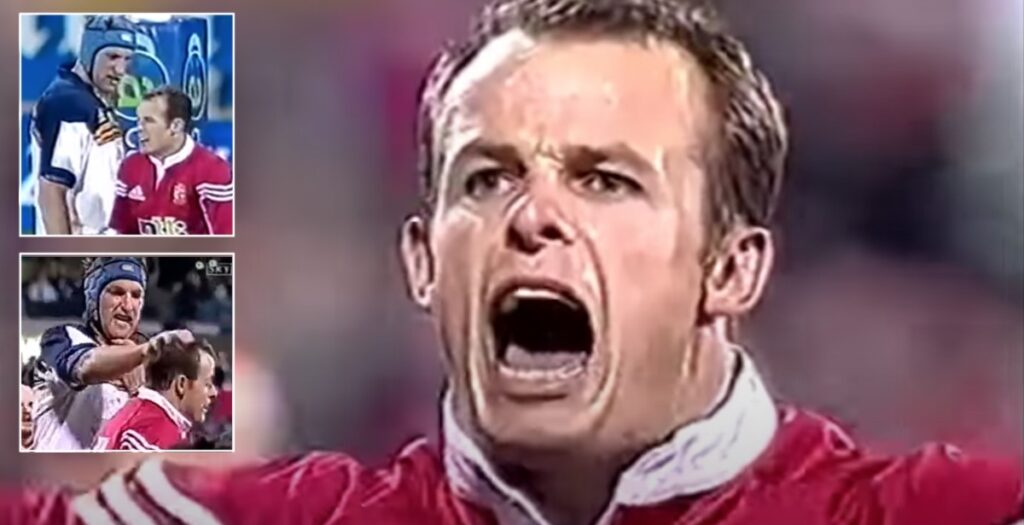 Former England player Austin Healey got one over on ex-Wallabies lock Justin Harrison during the British & Irish Lions match against the Brumbies in 2001.

The pair had locked horns earlier in the series when Harrison played for Australia A and the giant second row took exemption to Healey again while playing for the Brumbies.

The first incident occurred after Healey scored an intercept try in the first half. Harrison ridiculed Healey over the Brumbies’ big lead at the time saying “That’s just one try, mate, you’re being hammered”.

The 6ft 7” enforcer then lost his cool completely in the second half after threatening Lions second row Scott Murray for accidentally stepping on his face at a breakdown.

Minutes later he was involved in another spat, this time with Iain Balshaw after the England winger made a horror high tackle on the Brumbies full back. Harrison launched himself at Balshaw causing handbags to breakout on the sideline.

In the final play of the game Healey, playing on the wing, bagged a dramatic try to double his tally and win the game for the Lions in Canberra. As part of his celebrations Healy signalled two fingers at Harrison saying “That’s two tries, pal, and you’ve just lost.”

The lock retaliated by rustling Healey’s hair like a child and throwing his scrum hat at the little playmaker. Arguably, however, Harrison got the last laugh after starring in the third Test match in Sydney to secure the series win for the Wallabies.