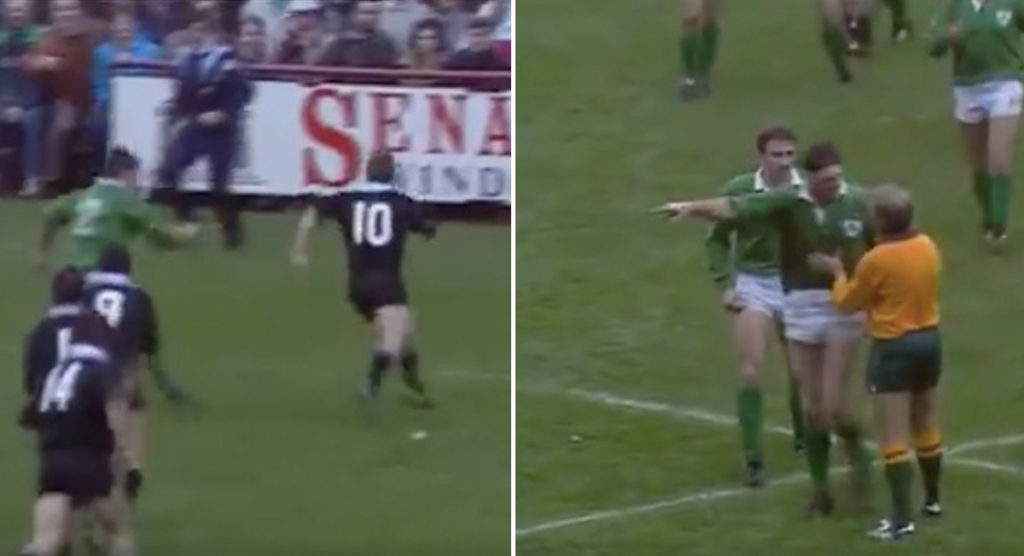 Today sees the top two teams in the world face off in Dublin in one of the most highly anticipated games of the year. Looking back at previous clashes, there was this amusing incident at Lansdowne Road in 1989, where a young ball boy became a national hero.

When New Zealand legend Grant Fox rounded the Irish defence and crossed to score, he thought he had picked up his first ever try against Ireland.

As you can see in this classic old footage, the touch judge on the far side had already had his flag up for a while, but couldn’t get the attention of the referee. Eventually, it took the intervention of a young ball boy to go on and point him in the right direction, which eventually led to the try being ruled out.

That ballboy, Garrett Tubridy, was interviewed and later wrote famous New Zealand commentator Keith Quinn a lovely letter after he had already asked for the footage of the interview. Quin shared the thank you letter on twitter recently, as you can see below.

An Irish v NZ rugby story. In1989 Grant Fox scored but it was ruled out by a TJ. A 13y.o ballboy Garrett Tubridy ran to tell the referee. Garrett then nicely wrote to me for the video. In 2017 he was Director of Womens RWCup in Ireland! Video & pic here. https://t.co/V3qW8dAJBi pic.twitter.com/uUyaYHLVXo

The great nature of the interaction continued with a reply from Tubridy, who would now be around 42-years-old and is involved in rugby at the administration level.

Wow- you kept the letter! This is very cool. Thanks. The @AllBlacks tweeted the video last night and I have been inundated with good wishes (and a fair bit of good-humoured slagging), including from my kids). Glad to inform you that my spelling has improved! Thanks. Garrett

Quinn then followed up with another amusing reply.

….further to the Irish-NZ rugby letter of 29 years ago. Yes Garrett @gtubridy your spelling was OK. There was also a nice touch on page 2 which I should have included. You signed off ‘yours thankingly’ which I’d never heard of before or since! Truly unique. Best wishes!