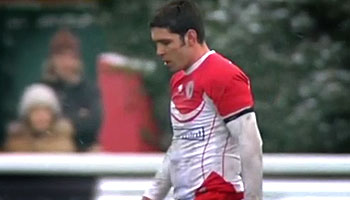 Last week Biarritz scrumhalf Dimitri Yachvili was cited for repeatedly stamping late in the Top 14 game against Racing Metro, last Saturday. Due to the delay in the disciplinary procedures in France, Yachvili is actually free to play until his hearing.

Yachvili was sin-binned for his multiple stamps on Henry Chavancy’s legs as the Racing Metro player found himself trapped in the bottom of a ruck, apparently preventing the ball from emerging.

The incident occured as Biarritz were hot on attack, attempting to narrow the gap in the Parc des Sports Aguilera fixture, which ended with Racing winning 23-11.

Yachvilli, a veteran of 61 Tests, was cited but he will only face his hearing come March 13, which means he is free to play until then. As a result, he played in Friday night’s Basque derby against Bayonne, where he kicked two penalties as the sides drew 6-6.

Ireland prop Cian Healy was banned recently for a similar incident, although he appealed and on a technicality, had the suspension reduced by a week.

His hearing was five days after the incident, whereas Yachvili will only appear before the discplinary committee almost three weeks after trampling on Chavancy.

There’s plenty of time to discuss this one before we find out what kind of suspension he receives.

What are your thoughts on it? Let us know in the comments below