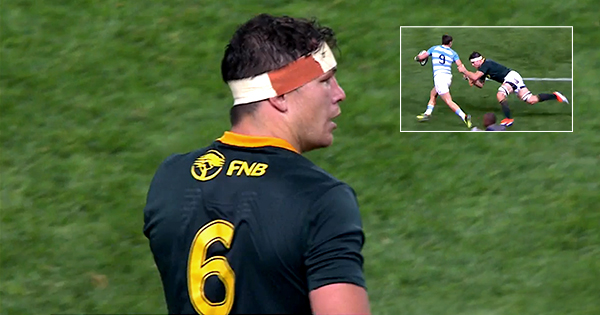 The Springboks’ 34-21 win over Argentina featured some great finishing by the wingers out wide but the forwards played their part with a few standout tackles, turnovers and special moments at the breakdown. This one, featuring Francois Louw, stood out for Bok fans.

The 33-year-old Bath flanker chased back to catch Argentina scrumhalf Gonzalo Bertranou before rapidly getting in position to get the turnover and earn an impressive breakdown penalty.

Hooker Malcolm Mark and centre Lukhanyo Am also earned their fair share of turnovers, but this from the 58-times capped Louw was pretty special.

He was actually substituted directly after that, having put in a good 60 minutes effort, epitomised by that final piece of play.

The good news for Bath fans is that Louw might be back in action for them soon, as coach Todd Blackadder has been working with Rassie Erasmus to figure out the flanker’s availability.

“I think we’re going to be working with South Africa. It’s just going to be a game by game basis,” said Blackadder. “Initially, it’s about Francois just playing the first four games for South Africa and then being back, but we’ll just have to wait and see.”

The Rugby Championship continues this weekend with New Zealand vs Australia in Auckland, then these two sides meet again when Argentina host South Africa in Mendoza.