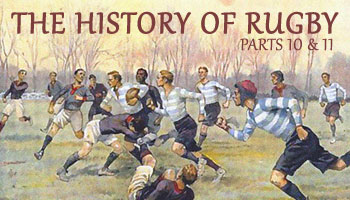 It’s been a while since the last History of Rugby posting, so today we continue with the next two parts as this fascinating documentary picks up with the 1974 British & Irish Lions in South Africa.

In the previous part there was talk of the physical nature of the tour, with the infamous 99 call being a big talking point on a hard fought series. As the Lions won the first Test, South Africa was thrown into turmoil as they didnt know how to deal with it.

The same followed in the second Test, as the visitors played some fantastic rugby. By the time the third Test came around, tensions were high as both sides exchanged some devastating blows in what were some ugly scenes. The Lions went on to win the match though, and pick up the historic series win.

It was also a great period for Welsh rugby , and by the time the next Lions tour came around in 1977, they were feeling confident against New Zealand. That was to be an entirely different tour altogether though.

By 1980 England rugby had picked up again as Bill Beaumonts side won the Grand Slam, including a famous win over Wales with a last minute penalty kick by the aptly named, Dusty Hare.

In 1981 it was the year of the infamous Flour Bomb Test in New Zealand, a match that was marred with protests, violence, and one man flying an airplane around the stadium while dropping flour bombs on the field below. Isolation followed for South African rugby for the next decade due to the right wing governmental policies that were in place at the time.

The Wallabies toured the British Isles in 1984 on their Grand Slam quest as they managed to beat each of the home nations, with young David Campese coming to prominence. Scotland won a Grand Slam of their own earlier that year, taking the Five Nations Championship.

The two parts below are posted as a playlist for simplicity’s sake. Just hit play once, and the second will follow after the first. If anyone has any trouble with the playlist, please shout.