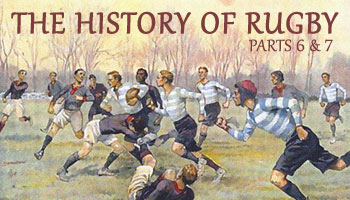 It’s time to continue the History of Rugby series with another two parts that should both fascinate and enlighten the avid rugby fan. While the popularity of the last posting seemed to drop slightly, I hope that as we get to more recent and familiar times, things should pick up again and everyone can find some enjoyment in the clips.

In these two parts there’s a few classic tries. The first comes in 1963 when British & Irish Lions back Richard Sharpe scored an incredible solo try for England when playing against Scotland.

In 1965 New Zealand rugby took a stance against Apartheid when they cancelled their tour of South Africa after making a policy to select Maori players. In 1966, they hosted the touring British Lions with a clean sweep of four from four. The All Blacks then toured Britain in 1967, remaining undefeated.

The 1960/1970 tour of South Africa to the UK was one met with staunch opposition as the political situation led to demonstrators making themselves heard throughout the tour.

Anti-Apartheid activists were out in force when they played both Oxford and Scotland, and perhaps their was some consolation for them as the Springboks lost both games, and then lost to England too.

The last game of the tour was the most entertaining in terms of a spectacle as they played and beat the Barbarians with some fantastic tries being scored by both teams.

The seventies was an incredible era for Welsh rugby as we see them winning their first Grand Slam in nineteen years in 1971. Barry John, Gareth Edwards, JPR Williams, and a whole host of other stars later became Lions legends, which we’ll see in the next few parts of the series.