The Rugby Club Plays of the Week 2012 - It defies description 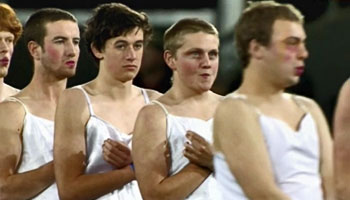 We have a bizarre serving of Plays of the Week today, as we’ve put together the latest two episodes, exposing us all to some interesting goings-on around the world of rugby. There are also some great hits, tries, and even a bit of salsa.

The boys at the Rugby Club in Australia, namely Sean Maloney, have put together another two weeks of crazy clips that are sure to bring as much bemusement to fans as they will enjoyment.

There’s the ballet-dancing males in Dunedin before the All Blacks vs Springbok Test, the Graham Henry promo for the New Zealand women’s Netball team, and then there’s the classic Salsa Ball lineout call, which made it onto Plays after it was shared via RD last weekend.

The Rugby Championship is featured, with some of the best tries and dirty bits popping up, and Pretoria gets a mention as today the Springboks host the Wallabies at Loftus, a place where Bulls fans have made quite a name for themselves over the years (as have the cheerleaders).

The ITM Cup and Currie Cup have both been providing some sensational rugby, and while we haven’t been able to post everything, the Plays team have included some of the top tries too.

Enjoy the weekend and if you see anything you think should be featured on RD, please get in touch. FYI – The Related Posts below have longer looks at some of the incidents featured in the video.