The Rugby Club Plays of the Week - RWC Week 2 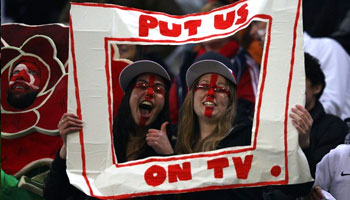 We’ve had another great week of World Cup rugby with plenty happening both on and off the park. This latest edition of Plays of the Week from Fox Sports in Australia covers some of the good, the bad, and the downright ugly.

There seems to be a slightly different feeling with the fans at this world cup in New Zealand, as fancy dress has become quite the norm, with all sorts of different characters and costumes turning up in the stands. It would probably be safe to say that that’s the Sevens influence coming into it, and it’s brilliant.

One thing the Irish fans will have been enjoying this past week, and perhaps neutrals too, is their great win over the Wallabies. Seeing as this is an Australian segment, it’s brushed under the carpet, naturally. But Irish fans don’t despair, it’s all in good fun as your team outplayed the Aussies, and they’re well aware of it. Cian Healy’s nice hit on Quade Cooper though, so there’s that.

Elsewhere there were some great tries scored by South Africa against Fiji, with flanks even getting in on the act of supplying cross-chip-kick-passes, while Wales scored a nice try through Shane Williams which put the game out of reach of a strong Samoan side. Romania and Argentina ended up being one sided, with the South Americans throwing the ball about beautifully.

One of the players of the tournament so far has been USA Eagles captain Todd Clever, although he tarnished the good with a little bit of bad against Russia unfortunately. He was let off though, which can’t be said for Fiji’s Dominiko Waqaniburotu, who was suspended for three weeks for a tip tackle and had his appeal rejected. If Fiji don’t make the semi finals, that signals the end of his World Cup.

Enjoy the plays of the week, and have a great weekend.