The Shortball highlights wrap from Round 5 of Super Rugby 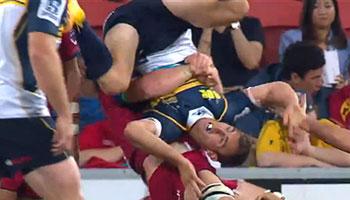 Catch up on what went down in Round 5 of Super Rugby this past weekend, as the Shortball takes us through some try scoring highlights, then looks at the best of the bunch, shows us some of the biggest tackles of the round, and includes a wrestling move that probably shouldn’t be repeated.

In fact Liam Gill has since been banned for two weeks for his flip, suplex clean out on Brumbies scrumhalf Nic White. It’s amusing to see, but he was yellow carded and has since been told that even though White landed safely, it’s considered illegal lifting. More on that soon.