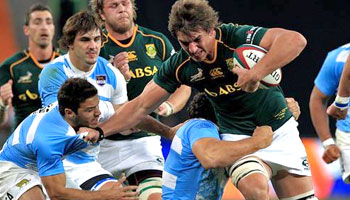 The Springboks started their Rugby Championship campaign with a nine try demolition of Argentina, winning 73-13 in Soweto. They now look ahead to the rematch, where Argentina will be hoping to bounce back in front of their home crowd in Mendoza.

It took a while to get going but after a comfortable 26-6 lead at the break, South Africa hit their straps and powered to an easy win, scoring seven tries in the second half.

There was also a penalty try and two yellow cards, one for a tip-tackle on Engelbrecht.

Captain De Villiers said that there are still elements that need to be worked on, while Argentina’s Felipe Contepomi, who scored a consolation try for his team, said that they will not make excuses.

“We are very grateful that we are in this tournament. For us every game is a learning curve. Today is very tough to swallow and I hope we come stronger for next week.

“We need to keep growing. We know we are playing against the three best teams in the world. So for us it’s a great, great challenge and I hope that next week we are better than today,” he said.

Despite Argentina not having won a match in the tournament in seven attempts, De Villiers says that they will be a different side in front of their fans next weekend.

“They’ll be hurting going back home, losing by such a margin. We have to enjoy this win because it doesn’t come around very often. We have to start all over again because the beauty of this game is that seven days can be a very long time.”

Fourie Du Preez, who made his return on Saturday, is unavailable for the away legs of the tournament so coach Heyneke Meyer has brought in Piet Van Zyl, while tighthead prop Lourens Adriaanse comes in for Trevor Nyakane, who was dropped for repeated breaches of team protocol.

Marcell Coetzee and Jano Vermaak also join the squad, while Chilliboy Ralepelle has been ruled out of the tour after having injured his back in a gym session on Saturday morning.

Can Argentina can bounce back from this, or are the Springboks looking too strong at the moment?