The Top 5 Crazy Cards of All Time - Rugby HQ 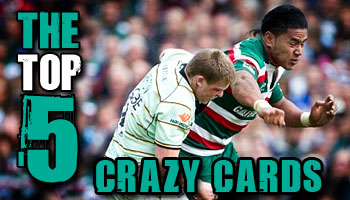 Following the controversial dismissal of Bismarck Du Plessis in the Rugby Championship, and the admission by the IRB that referee Romain Poite got it wrong, the Rugby HQ guys looked into the archives to find similar mind-boggling referee calls.

It goes without saying that without referees, we wouldn’t have the great game. Rugby is also one of the few high profile sports where we treat them with respect, and rarely question their judgement.

Having said that, with excellent TV broadcasts and analysis these days, we’re able to scrutinise every call from the comfort of our La-Z-Boys, and occasionlaly, they do produce some shockers.

Technology is not only the reason we feel we’re able to accurately criticise, but it’s also one of the things that is now available to them, so there really shouldn’t be any big calls gone wrong.

Poite’s big call came a week after the decision was made to allow referees in the Rugby Championship to ask for replays of foul play to be put up on the big screen in the stadium.

That is a new innovation though and in recent years, while there was still the ability to speak to the touch judges and use common sense, we’ve seen a few howlers.

Sean Maloney compiled a list of some of the worst in recent memory with their latest Top 5 list.

View our Top 5 archive, and all the incidents mentioned in the video in the Related Posts below