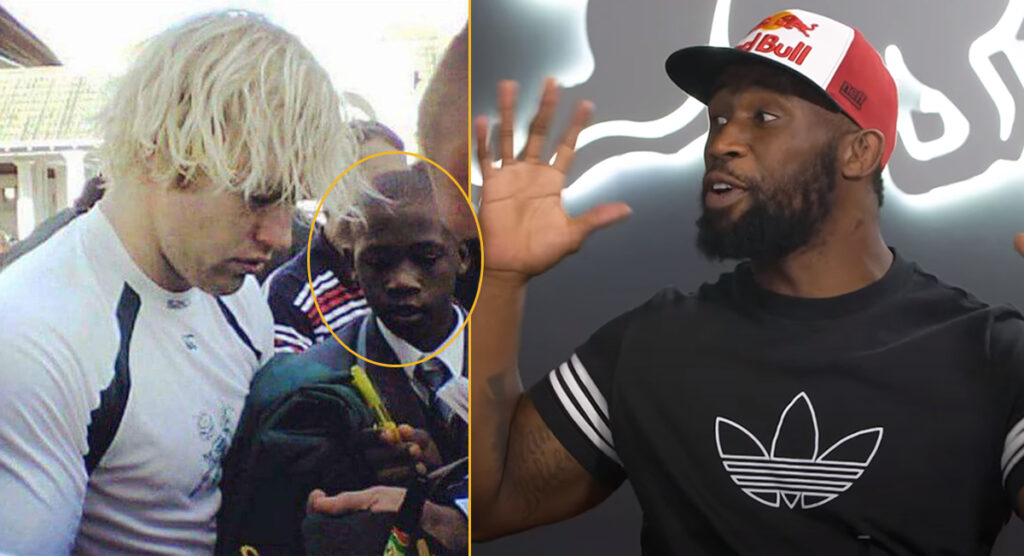 Springbok skipper Siya Kolisi has appeared in the media a fair bit of late. From helping communities through the pandemic to commenting on Black Lives Matters issues, the 2019 World Cup winner has been extremely busy since that historic day in Japan.

As well as running his family and staying in shape for when rugby does finally start up again in South Africa, Kolisi took some time out to chat with former teammates and Springboks Jean de Villiers and Schalk Burger, to catch up on all things life and rugby.

One of the topics that came up was the day that the Springboks visited Siya’s school, Grey High School in Port Elizabeth in 2006. On that day he got to meet the players in Test week, including fiery 23-year-old blonde flanker Burger.

This photo, that surfaced online ahead of Kolisi’s Test debut, was taken on that day.

The Stormers and Bok flanker says that the visit from the Springboks on that day was a clear motivating factor for him in his life.

“It made me realise this is what I want to do. Because the effect that you guys had on us, that blew my mind. All that was important was what you made me feel at that moment in time..,” he explained on the Use it or Lose it youtube show.

“I didn’t even know. I had never seen that photo until I played my first game for the Springboks. And it was of the best things that happened.”

They went on to discuss how Burger broke his neck against Scotland a few days later, putting him out of rugby for a year.

The chat starts around 11:47 below and continues on that topic until 15:20 or so