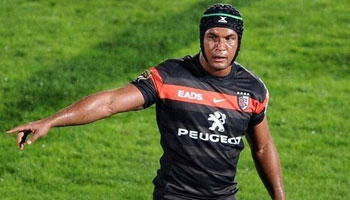 It was a big weekend in Europe as the Heineken Cup kicked off with twelve matches, and the Amlin Challenge Cup with ten. We’re sifting through the best of what took place to bring you some good clips, but for now here is a nice hit from the French captain.

Four time champions Toulouse were too good for twice winners Leicester Tigers as they claimed a 23-9 victory at home, a win that could yet be crucial in Pool 2 of the tournament.

Teenage centre Gael Fickou caught the eye as he not only scored the game’s only try, but looked a fine prospect in his all round play, earning him the man of the match award.

Luke McAlister kicked six penalties, but it was the forwards that made a big difference in the wet conditions, with Thierry Dusautoir leading from the front and number eight Louis Picamoles particularly impressive.

“With the rain falling heavily, it was a really difficult match,” said Toulouse coach Guy Noves. “It was tough so I can only congratulate my players for rolling up their sleeves although it was unfortunate that we didn’t score one or two more tries and kill off the opposition.”

Both sides had a full go at each other physically, and Dusautoir made one of the biggest tackles of the game as he smashed Jordan Crane, following a particularly unkind pass from Ben Youngs.

We’ll have more clips from the Heineken Cup soon. If there is anything in particular you would like to see featured, please get in touch via email.