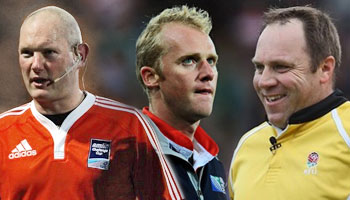 During the Super Rugby season we featured a video of three referees getting knocked over in one weekend. It seems as though it’s not just those down south who want to get in the thick of it, as recently the same thing happened again, this time up north.

Last night referee Romain Poite found himself taking quite a hefty tackle too. His knock was possibly worse than the three featured below, so we’ll get that up seperately as this was meant to be posted as a Friday Funny, but as with what happend to these guys, things don’t always go to plan.

If you have a good memory you’ll note that it was Keith Brown, Stu Dickinson, and Ian Smith that took a tumble in the Super Rugby post, much to the amusement of the commentators. This time around it was Neil Paterson while reffing Munster vs Edinburgh, Wayne Barnes pinballed in the Saints vs Tigers game, and Andrew Small pulled into a ruck when Leinster played Glasgow.

Paterson got himself in a bad position and was tripped (accidentally) then piled on, while Barnes got a bit of a shove, bounced off another player, but then popped straight up qite impressively.

Small’s incident was probably the funniest looking as he got in the middle of the ruck and at one stage looked like he was going to attempt to clear out a player or two. He did well to get the whistle in the mouth at the time, and even better to not swallow it.

We’ll get that Romain Poite clip up soon, as well as others from another busy weekend of rugby.