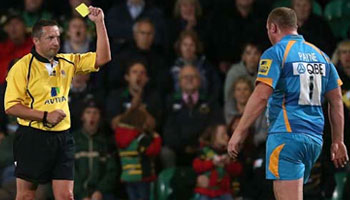 London Wasps front rower Tim Payne has been suspended for two weeks after he was yellow carded for dropping his knee onto the head of Northampton Saints’ Vasily Artemyev on the weekend. Payne was shown a fairly lenient yellow card at the time.

Payne was cited following Friday’s Premiership match against Saints as RFU citing officer Shaun Gallagher found that he had contravened law Law10.4 (a) for striking.

The England prop pled guilty to the charge of striking a player with the knee at a hearing in London earlier today. The hearing consisted of the RFU Disciplinary Panel of Judge Jeff Blackett, Elizabeth Riley and Peter Budge.

He will be out of action until October 16 and will miss Wasps’ next two games against Worcester Warriors, and Newport Gwent Dragons (in the Amlin Challenge Cup).

The occasion of his 250th appearance for Wasps was marred by the incident after the touchjudge’s interventon, and a subsequent referall to the TMO for foul play.

Elsewhere, Sale’s Andy Powell and Tom Brady have both been cited for misconduct and a spear tackle respectively. Their hearings take place tonight.