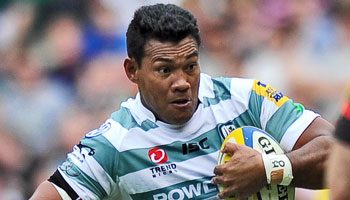 Last weekend London Irish’s Samoan forward Ofisa Treviranus was shown a yellow card by referee Wayne Barnes for a big tackle on Charlie Hodgson at Twickenham. The incident was referred to the TMO under the new law rulings in the Aviva Premiership.

The second of the big London Double Header games proved to be a bit of a walkover for Saracens, who thumped London Irish 40-3, which Sarries debutant Chris Ashton scoring twice, and Brad Barritt and Nils Mordt also crossing.

Flyhalf Charlie Hodgson became the first player to pass 2000 points in the Premiership, but not before he was smashed by Samoan bruiser Ofisa Treviranus in the first half.

Wayne Barnes took advantage of the new laws as he referred it to the Telivision Match Official, who confirmed that foul play had taken place, as the tackle didn’t include appropriate use of the arms.

A few minutes later Saracens wing Chris Ashton was also yellow carded in a similar manner, as he stuck his shoulder into Steven Shingler after the ball has been passed.

While not everyone is in agreement about the trialing of the new laws surrounding the TMO – which includes them being able to adjudicate on forward passes in the lead up to tries, and to check if try scorers were in front of the kicker.

While there is still room for intepretaion, it looks as though the weekend showed that it could go some way to stamping out foul play, and late shoulders in particular.

What are your thoughts on the way it has been used so far, particularly around foul play?